"Knock, Knock" Should be Left Unanswered 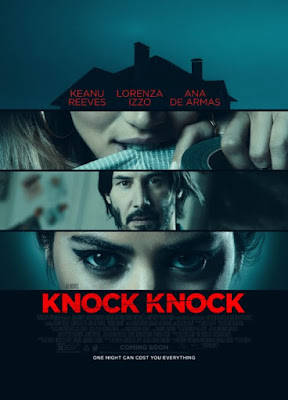 Director Eli Roth's 5th film "Knock, Knock" was released through Video on Demand in the fall of 2015.  It's a departure from his usual over the top gore fests and it also starred a known actor in Keanu Reeves.  This film would be classified as a twist on the home invasion thriller.

Keanu plays Evan an architect and family man who lives in a nice house in with his artist wife who does colorful sculptures.  Evan is an aging hipster who used to be a DJ and has a killer vinyl collection.  He's a laid back dude who is good with his kids, but his marriage is going through a rough patch.  His wife and kids have gone off on a mini beach vacation so he can get some much-needed work done, but his deadlines are about to be the least of his problems.

During a torrential downpour the first evening there is a knock, knock at the door.  Two young, sexy girls are soaking wet and asking if they can use his phone because they are having car trouble on their way to a party.  Genesis and are played by Lorenza Izzo, of "Green Inferno" fame and Roth's wife, and Ana de Armas.   Evan is very polite and accommodating.  He gets them towels and calls Uber to get them a ride to the party, although it will be 45 minutes until the car will be there.  There is an awkward tension between the three and you can immediately see where the story is headed and doesn't deviate from the expected plan.  The girls are aggressive and unrelenting in there tormenting of Evan.  His morality conundrum eventually cracks and they have a shower threesome.  The morning after the girls are still there and are making a mess not only of his kitchen but his life.  From here on out Evan goes into full "Keanu" mode as his acting is just an awful mess.  In his defense, the script doesn't give him much to work with as the focus is mainly on the two psycho sluts that make his life a living hell.  They deface his wife's artwork and in another cringe-inducing scene, videotapes herself raping him wearing his daughter's school uniform.  They lie, threaten and torture him until Lewis, his wife's art dealer, come over to pick up some pieces for a show.  He sees right through their charades and calls them out only to take an unfortunate fall.


I didn't particularly care for this movie as it seems to be too much in love with itself.  Which is a part of all of Eli's work but in "Knock, Knock" is just seems to be trying too hard.  The girls were completely insufferable and annoying matched with Keanu's "acting" it's just a one trick pony, that didn't deliver the goods.