1998 The Year of Gwyneth "Great Expectations" 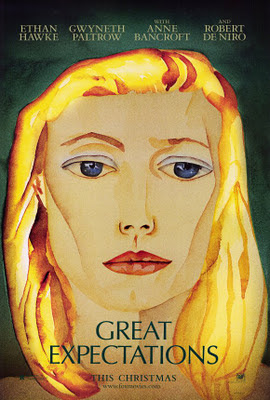 The classic Dickens novel "Great Expectations" has been adapted in many different things over the years along with several movies, this review will focus on the 1998 film directed by Alfonso Cuaron starring Gwyneth Paltrow and Ethan Hawke among others.  Remaking classic books and plays for a new generation is something Hollywood has always banked on and will forever be done whether warranted or not.

This modern retelling is a sexy and romantic tale of a penniless artist who gets introduced to a rich young girl and for the next twenty years tries to win her affections.  Ok its a little more than that but seeing as how I've never actually read the book, this version of the story is all I have to go on.  Living on the gulf coast of (Pip in the book) is a curious young boy who loves to draw.  While out by himself one day with his sketchbook he runs into an escaped convict played by Robert De Niro.  Scared to death Finn helps the man with his chains and feeds him.   These acts of kindness and feelings of terror will come back to him at an important crossroads later in life.  Another monumental influence in Finn's young life comes in the form of a rich eccentric woman Ms. Dinsmoor (Anne Bancroft) and her daughter Estella.  This sets the foundation for Finn's life as we flash forward some 15-20 years, Finn is now played by Hawke, while Estella is played by Paltrow.  After struggling for years as a painter, he finally seems to get his big break and a showing of his work in a swanky gallery.  Estella is also back in the city after spending a number of years studying and living abroad.  They meet rather coincidentally and the torch Finn has always carried for her is reignited, although Estella has always been no more than a tease going all the way back to their childhood.  Then there's Dinsmoor, even more, older and more eccentric than ever playing the part of the puppet master in toying with Finn and his emotions.  Finn's one an only muse is Estella and she loves being his model, but she holds him at distance and after years of instruction from Dinsmoor plays him like a fiddle.  When Finns learns that she is engaged he tries harder than ever to win her over, her engaged looks to be just a front in order to hurt and inspire him.  Will his last-ditch efforts to win her over finally work, or will he be forever pining for a woman he can never have? 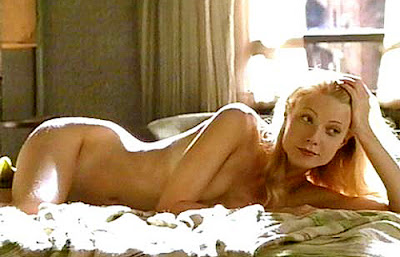 When it finally comes time for his big opening all of his artistic dreams seem to come true.  With a few bumps along the way as his well-meaning father (Chris Cooper) crashes the party and nearly ruins everything.  The opening is a huge success and all of his pieces sell, but behind all of this was a secret benefactor who has been controlling it all.  Finn is a good guy, almost too good and brings to mind the saying "Good guys always finish last", its what makes this such a heart-wrenching story.  I also must point out that the soundtrack and the music used throughout the fill is exceptional and would be worth buying on its own.  The film is only available on DVD and it's kind of dated.  A Blu-ray release is sorely needed and I'm still waiting for it, just like Finn for Estella.