Say Aloha to "The Descendants" 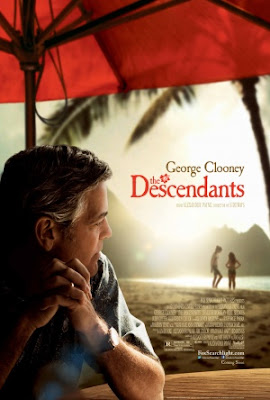 Say Aloha to "The Descendants" the 2011 Film by Alexander Payne starring George Clooney and Shailene Woodley.

Set on the islands of I love the opening narration by Clooney's character Matt King that goes something like, just because you live in a tropical paradise doesn't mean that your immune from the problems of everyday life.  Matt is a real estate lawyer who has deep ties to the island, his ancestors go way back to the founding fathers.  He's the trustee of the largest parcel of pristine undeveloped land in the state and him and his cousins are poised for a huge payday.  The trust expires in 7 years so the motivation to sell is there but can he go through with it and have the awe-inspiring scenery turned into another high dollar resort.  Although this problem is currently secondary due to the fact that his wife Elizabeth was recently involved in a boating accident and lies in a coma from which she may never recover.

Matt has been an absent father to his two daughters, 10-year-old Scottie and 17-year-old Alexandra (Woodley), prior to his wife's accident and now must try to care for them.  Both come with their own set of problems, Scottie frequently acts out at school, while Alex is currently at a boarding school after her unruly behavior.  Upon hearing the news that 's condition is permanent Matt must break the news to his girls and help them through the tough times ahead.  If that's not enough he receives another big blow when he finds out was having an affair and planning to get a divorce.  Matt is forced to re-examine his life and priorities.  He's a good-looking successful older man who is seeing his world fall apart and trying his best to stay afloat. This is the source of most of the humor along with Alex's surfer dude boyfriend Sid. 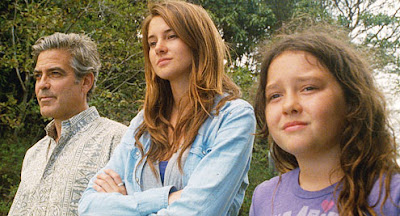 Clooney got a Best Actor Academy Award nomination for this role, not to mention launching the film career of Shailene Woodley.  Her portrayal of the troubled and angst-ridden Alex was well written as well as acted.  She is more than just the stereotypical angry teen.  She's a strong and multi-faceted young woman who is living her life to the fullest, just like her mother.  All of the acting performances were exceptional and the script was phenomenal.  As with "Sideways" Payne raked in another Academy Award for Best Adapted Screenplay.  The film is based on the book by Kaui Hart Hemmings.  The Descendants is a well grounded and real experience and I recommend seeing it.   Well to anybody reading this Mahalo. 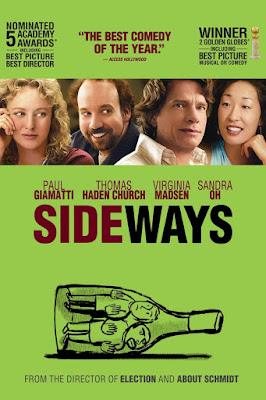 Five years after his hit comedy "Election" Director Alexander Payne received massive critical acclaim, and his first Academy Award, for the 2004 film "Sideways".  A buddy comedy that takes you on an unforgettable ride through wine country.

Paul Giamatti is perfectly cast as Miles an English teacher, struggling novelist, and wine aficionado.  His best friend Jack is played by , a washed-up actor who now mainly does voice-over work.  His obnoxious personality and gregariousness are the perfect match to Miles's depressive poor schlub attitude.  Jack is a week away from getting married so the guys plan a week-long trip to Wine Country.  Recently Miles has been extremely anxious as he's been waiting to hear back from his agent on whether or not his book will be published.  He is also still recovering from his divorce two years ago.

This movie is about romanticizing wine and people's obsession with it.  The film has actually been shown to have quite an impact on wine sales and popularity, especially for Miles, love affair with the Pinot Noir.  Jack, on the other hand, is just along for the ride looking to hook up with a few more women before the big day.  The reason this is such a great film is that it's well written, well acted and above all hit so many truthful beats.  The comedy comes organically from the characters and the situations they find themselves in.  Nothing feels forced and every emotion seems to flow and fit together perfectly. 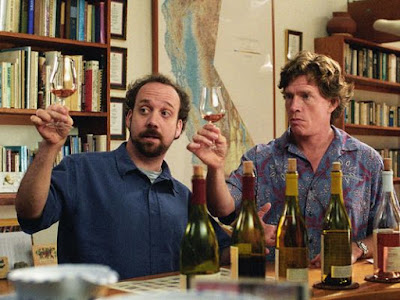 Jack and Miles are the perfect odd couple even when they meet up with a couple of women from the area.  Miles has known Maya, played by Virginia Madsen, for a number of years but has never had the courage or availability to ask her out.  Jack gets to know Stephanie, played by Sandra Oh, at one of the Vineyards who also happens to be friends with Maya.  The four of them eat and consume several bottles of wine that leads to two different kinds of relationships.  Although Jack has not told Stephanie about his upcoming weekend plans, this is a problem he would like to ignore for the time being.  But just like an oncoming train, it will have been dealt with and soon.

Jack and Miles's friendship is tested many times and none more so than the ending when Miles goes above and beyond the call of duty.  They do make it through the week and feel compelled to maybe improve their lives a little.  "Sideways" was nominated for 5 Academy Awards including Best Picture but its only win was for Best Adapted Screenplay.  It was the most critically praised movie of 2004 sweeping up all the major critics' awards.  It's definitely one to own and watch every once in a while for a feel-good laugh. 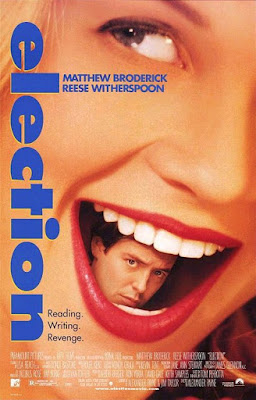 What's the difference between morals and ethics? This is the main theme of Alexander Payne's 1999 comedy starring Matthew Broderick and Reese Witherspoon.  Payne has built a reputation as one of the premier American directors working today.  His films are character driven comedies that are often painfully awkward and above all human and truthful.

Morals are defined as a person's standards of behavior or beliefs concerning what is and is not acceptable for them to do.  While ethics are moral principles that govern a person's or group's behavior.  Matthew Broderick who plays Jim McAllister a high school history teacher who is about to have his morals and ethics challenged by the overly ambitious Tracy Flick played by Reese Witherspoon.  Every school has a Tracy Flick, that feisty overachiever who knows how to get what they want and look good doing it.  The upcoming student body presidential campaign will be a fight for the ages and not for the faint of heart.  As with all politicians, Tracey's morals and ethics are a bit questionable. Mr. McAllister's hatred of her grew out of an illicit affair that happens between and another teacher, Mr. Novotny.  The whole incident was kept relatively quiet, but Novotny was fired and his life was destroyed.  Initially, was running unopposed but Mr. McAllister wanted to knock this uppity bitch down a peg so he encourages football player Paul (Chris Klein) to challenge her.  Paul recently fractured his leg and is unable to play leaving him to wonder about his future.  Paul is a gentle and likable guy but a little dumb,  kind of the George W. Bush of the whole election group. 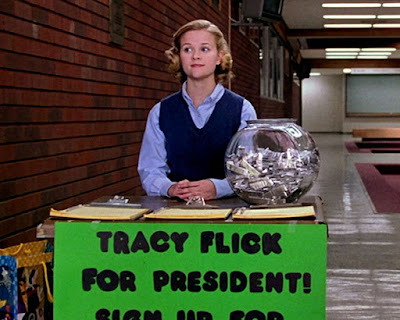 The story gets even more involved as Paul's sister Tammy, who likes girls, has a falling out with her best girlfriend who then as an act of revenge starts to date Paul.  Fed up with all this Tammy decides to run for president too except as an anti-candidate who wants to abolish all high school government.  Mr. McAllister's boring home life is about to get a little more interesting as he contemplates moving in on Novotny's wife Linda.  McAllister's increasingly bad decision making leads to some painfully funny and awkward moments.

When election day finally arrives and things don't go as planned Mr. McAllister will do whatever it takes to crush the dreams of Tracy Flick.  Eventually, he has to answer for his severe breach of political ethics and personal morality leaving him to re-evaluate his life and to finally move and to start over again.

"Paper Man" is one to Save from the Recycle Bin 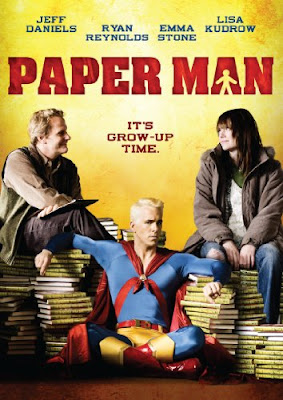 Released in 2010 "Paper Man" has the quintessential indie film elements that worked well for Sophia Coppola's "Lost in Translation".  It works as well thanks to the performance by Jeff Daniels, Emma Stone, Ryan Reynolds, and Lisa Kudrow.

Jeff Daniels plays Richard Dunn a struggling writer (is there any other kind) who is determined to write a follow-up novel to his not so successful first one.  To do this he takes up residence in a seaside cabin and tries to shut off everything else in his mind, his wife Claire (Kudrow), their friends and mostly his imaginary friend Captain Excellent, played by Ryan Reynolds.  Captain Excellent has been with Richard since he was a child, he wears blue tights, a red cape, and an unusually large codpiece.  The Captain is a rich stew of Richards fear, anxiety and neurosis.  A strongly held security blanket that has been with him far too long.

Richard ventures into the small resort town to clear his head and runs into a local high school girl named Abby played by Emma Stone in one of her first roles before making it big.  Even though Richard is alone in the cabin he hires her to babysit, while he goes out to drink. Upon his arrival back he finds she has made homemade soup, the key to any man's heart.  Their relationship is similar to that of Lost in Translation in that it is an older man and a younger woman in a completely non-sexual relationship.  Their characters have this deep unspoken understanding of each other.  Both are at a crossroads in their life, a sort of limbo waiting for the next thing to come along.  Abby has a douche bag of a boyfriend that Richard disapproves of but doesn't want to intervene.  Abby also has a male best friend/stalker in Chris who is that painfully stereotypical guy who is stuck in the friend zone and pines for something more.  This creates a weird sort of dynamic around Abby and the three guys in her life. 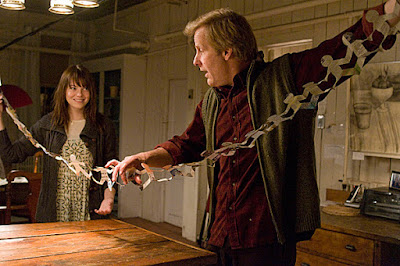 With some help, Richard is forced to make some life decisions and opens up to his wife that in turn strengthens their waning marriage.  His seemingly eternal writer's block is broke free with his friend and muse Abby and his ultimate dismissal of his need for Captain Excellent.

Jeff Daniels always brings it in whatever role he plays from "Dumb and Dumber" to "The Newsroom" and is one of the most underrated actors working today. As for Emma Stone she just owns her role as Abby with a no-nonsense personality and a presence that jumps off the screen.  It's a good thing too because the plot in itself is pretty tired and worn out.  The filmmaker's poor script was saved by all the actors involved.  "Paper Man" while starting a little slow really comes into its own and makes it a worthy watch.