"White Bird in a Blizzard" a Gregg Araki Film 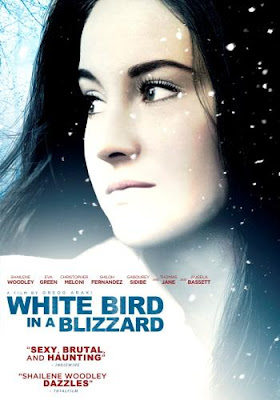 A little while ago I reviewed the film "Mysterious Skin" by indie auteur Gregg Araki that stared a young Joseph Gordon Levitt in his latest film "White Bird in a Blizzard" another hot young actor in Shailene Woodley of "Divergent" fame takes center stage.  Araki's films are character-driven dramas that push the boundaries of mainstream .  This film also stars a number of great actors in Eva Green, Christopher Meloni, and Angela Bassett. It currently can be found on Netflix Streaming.

This film is all about Woodley's character of Kat Connors a 17-year-old girl whose mother, Eve (Green), ran out on her when she was young leaving her to deal with her uptight milquetoast father Brock (Meloni).  The first line of the film is from Kat saying "Mom are you Okay" which is absolutely perfect, it says so much about the upcoming narrative in a mere four words.  Although Kat had a rather stormy relationship with her mother, she still loves and misses her.  As mentioned before Brock is an emotional blank slate working a menial job, completely unavailable for anyone.  Even when she was around her parents were constantly at odds with each other.  Eve looked to be trapped as an unloved underappreciated housewife dying a slow suburban death.  When she disappears Kat drifts further away from her family and intensifies her relationship with the only person that pays any attention to her, the neighbor boy Phil (Shiloh Fernandez).  It was actually quite surprising to see multiple nude scenes from Woodley who has built her career on big-budget family-friendly movies.  It's great to see her taking risks and putting her self out there, something that most actors her age would normally turn down.  Although that being said it is a Gregg Araki film so pretty much anything goes. 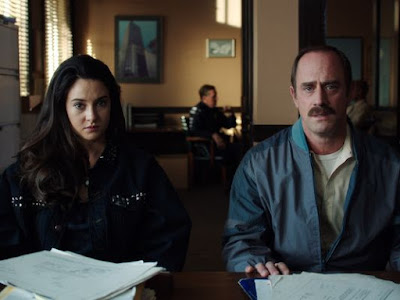 Kat graduates from High School and goes to where she meets new people but is still in a sort of mental funk.  "The future bores me," she says at one time.  Upon coming home for spring break her dad has landed a new girlfriend, that she could care less about.  Kat and her friends start to wonder what really happen to her mom and some pretty wild theories pop up, but exactly how wild are they?  Could Brock have killed his wife?  The film then turns into a kind of strange Nancy Drew novel as Kat begins to suspect that her father knows more than he is telling her.  He starts to show an angrier dark side, but he's already kind of strange, to begin with.  The ending unleashes a twist that is perfect for an Araki movie.  It's shocking and a bit funny at the same time.  Hopefully, Kat can move on from her tragically damaged family life and create a peaceful existence of her own.  Hopefully, she won't disappear in that blizzard.