"Josie and the Pussycats" Rock the House! 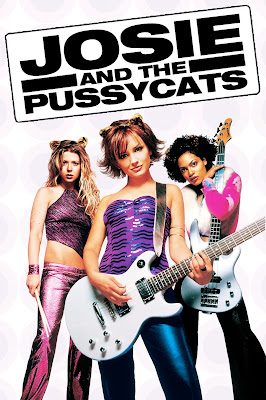 Every so often you'll come across an older movie that you've never seen but always wanted too and it turns out to be completely different than you thought it would be.  "Josie and the Pussycats" is just such a movie.  Released in 2001 and obviously marketed to teenage girls, it's actually a darkly satirical and sarcastic laugh riot.  Although maybe not so much in 2001, the last 14 years or so has given it time to mature like a fine wine and be even more cheesy, campy and ridiculously funny.

Adapted from the "Archie" comic books from the 1960s, "Josie and the Pussycats" are an all-girl rock band brought into modern day reality.  Josie is played by the down to earth and electric Rachel Leigh Cook, which was the main reason I wanted to see this movie in the first place.  Rosario Dawson is Valerie the tough and smart bass player, while Tara Reid is Mel the ditzy blonde drummer.

Remember this was a time period when boy bands like "Nsync" and "Backstreet Boys" ruled the charts.  The movie opens with such a band called "Du Jour" and there number one hit single "Backdoor Lover".  Their record label Mega Records has created them and molded each of their personalities and their music to sell to their adoring fans.   Although if they become aware of what's really going on behind the scenes they can replace them in a moment's notice.  The band's interaction on their private jet is priceless, the petty arguments and celebrity whining all ring true.  This brings another clever part of the film to the forefront or shall I say background.  Product placement in movies and TV is quite the shameless epidemic and the filmmakers take this concept to soaring new heights.  Every single shot in the film has been arranged to show some sort of blatant product placement.  Dujour's jet is plastered with Target logo's and bottles of dish soap? Must be because of their squeaky clean image.  This sort of tongue in cheek satire is littered throughout the film. 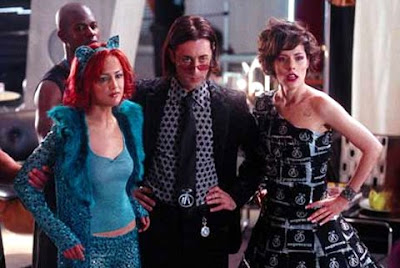 Okay back to the girls.  When Dujour's jet mysteriously crashes. Mega Records executive Wyatt Frame (played brilliantly by Alan Cumming) needs to find the next big thing and just happens to spot "Josie and the Pussycats" crossing the street.  He immediately signs them and within a week they are the hottest band in the country. The girls find this a bit odd but fame and celebrity can be pretty awesome.   When the group learns that Mega Records puts subliminal messages into their music, they must fight the power and save legions of teenage fans from wanting to drink Zima and buy Puma sneakers.  Josie and the girls have remained grounded and skeptical until Josie is given a CD from Wyatt that turns her into a selfish bitch.  He also enlists Carson Daly to kill Mel and Val, this is actually how Carson and Tara Reid met in real life and almost got married.  The girls then must deal with the evil Fiona (Parker Posey) the head of Mega Records.


Filmmakers Harry Elfont and Deborah Kaplan could have gone a few different ways with the material but went all out in crafting a witty, thoughtful and fun piece of cinema that could have been so much worse.  I can now definitely say that "Josie and the Pussycats" are totally jerkin'.