Joseph Gordon-Levitt is "The Lookout" 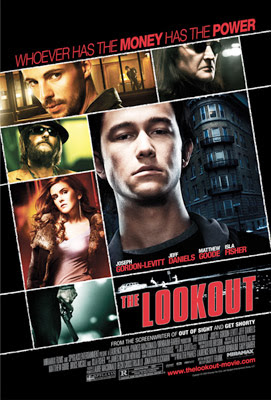 Two years after the success of "Brick", Joseph Gordon-Levitt starred in another indie film called "The Lookout" with another first time director in Scott Frank.  Although Frank has written a number of hit films over the past twenty years, it was his first shot at getting behind the camera.  It would be easy to say that "The Lookout" is a heist film, which it is, but its more of a character study of a young man named Chris Pratt.  Not to be confused with the actor Chris Pratt who was in "Guardians of the Galaxy"

While in high school Chris was a standout hockey player without a care in the world.  His whole life ahead of him until one night while cruising through the back farm roads in a convertible with some friends, a magical moment is turned tragic.  To better see the clouds of fireflies with his girlfriend he turns his lights off, it's a surreal moment until reality literally hits them in the face.  The car crashes head-on into a giant tractor and the friends in the back seat are killed.  Chris and his girlfriend are thrown but survive.

Flash forward 4 years and Chris is still learning to live with the brain injury that has turned his life into an unexpected and frustrating path.  His short-term memory has been severely damaged and must keep clear notes.  Due to this disability, the only job he can get is a nighttime janitorial position at a small town bank.  Although it's a long drive from his apartment it forces him to drive by the scene of the accident twice a day. 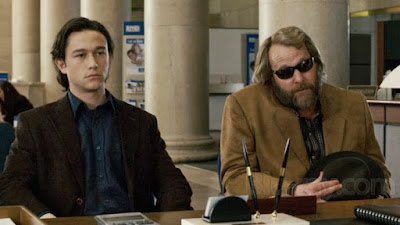 With the financial support of his upper-class family, he lives in a small apartment with the pragmatic and father like Lewis, played by Jeff Daniels.  Lewis is blind and has learned to live with his ailments.  Chris lives a quiet and solitary life and doesn't have any friends his own age.  So one night at the local bar a childhood friend introduces himself, Gary Spargo (Matthew Goode), who doesn't immediately recognize him but goes along with it.  hooks him up with a hot girl (Isla Fisher) and introduces him to a bigger group of shadier looking people.  After a short honeymoon period, comes clean with his intentions.  He and his crew rob banks and need Chris's help to hit the one he works at.  Chris is torn, he's a good guy at heart and it doesn't seem like something he would even consider, but he also feels trapped.  Yearning for freedom from his domineering family and the chance to realize some of his lost dreams.  He agrees to be the lookout, hey that's the title of the film!

Chris is a lost soul and his life has been defined by one bad decision he made as a teenager.  Will he learn from that experience and continue to improve his life inch by inch as he has been or will he be lured by the devil-like Gary into another life-altering choice?  A person's poor decisions will often unknowingly hurt the people around them but are only realized in hindsight.  While the last act of the movie does suffer a little bit from a case of convoluted bullshit things are resolved.  While the first two-thirds of the film does a great job in creating Chris's world and developing its characters it might be a little too slow for people expecting a classic heist film, this is made up for better or worse with the finale.  It's still a film worth seeing and the DVD includes a commentary track for those who like that sort of thing.  Check it out!