"Identity" Knows what a Good Horror Movie Should Be! 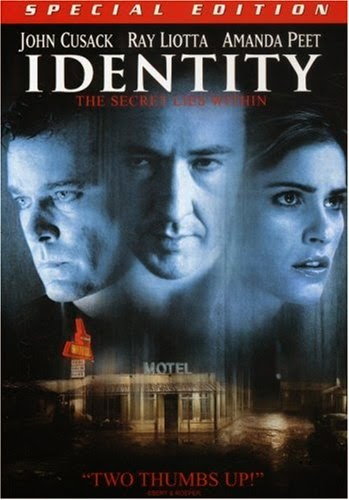 "Identity" combines a good script along with good execution to deliver a thrilling scare fest of a puzzle that entertains and surprises.  Although it did follow the trend of the super surprise "Sixth Sense" style twist ending, which pretty much makes the movie what is.  That being said it still doesn't take away from the enjoyment of it.

The story takes place at a desolate roadside motel during a monsoon-like rainstorm.  The ensemble cast is led by Ed, played by John Cusack, who while driving through the storm accidentally hits a woman on the side of the road.  The woman is a wife and mother of George and Lou.  They all go to the motel for help, but the phones are out as well as the cell phone service.  Getting back on the road Ed doesn't get that far as a few miles up the road he finds its flooded and heads back.  Various characters start showing up at the motel looking for a place out of the rain.  There's the bitchy actress, the young couple, the reformed prostitute, and the cop (Ray Liotta) who is transferring a dangerous prisoner.  They are all a little bit more than their stereotype indicates but nothing that will reinvent the horror genre.  While waiting out the storm one by one they start showing up dead and in pretty nasty ways.  The big mystery begins as to who is the killer? With each body that shows up, they find a hotel room key counting down to number one.  Ed, who used to be a cop, and Rhodes the actual cop team up to find the killer and protect who's left, but the murders don't stop and accusation and anxieties run high.  Eventually, they find out each of them has a connection to each other.  Is this just a strange coincidence or was the whole thing staged by some murdering psychopath? 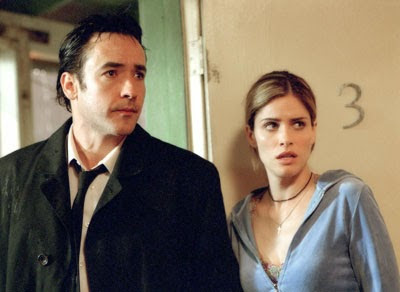 All of the action happening at the hotel is framed by another story of a death row serial killer named Malcolm Rivers trying to get a last minute stay of execution.  Dr. Malik, played by Alfred Molina, has new information that could help Malcolm's cause and a late night meeting has been set up.  The connection to these two stories is made clear in the big reveal at the end.  People familiar with horror movies might see a lot of the twists and turns to come but the filmmakers do a good job trying to stay one step ahead.

With so many possible spoilers it's a little difficult to review a movie like "Identity" but it's easy to see that a lot of thought and care went in weaving such a story and to not get lost along the way.  The film has quite the amazing cast for a horror movie in Cusack, Liotta, Molina, Amanda Peet, and a yet to be discovered, John Hawkes.  It's a fun movie that delivers all the thrills and chills it promises and that is a pretty rare thing.