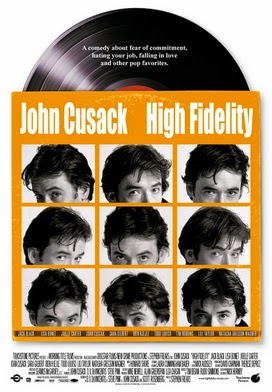 After watching the previously reviewed "Say Anything" you must follow that up with the 2000 film "High Fidelity".  Another John Cusack classic that's heavy on great music.  It's next to impossible not to like this movie.  It was directed by Stephen Frears and based on the book by Nick Hornby.  It co-stars Jack Black, Tim Robbins, and Lili Taylor among others.

Cusack plays regular guy Rob Gordon who owns a record store called Championship Vinyl were he works with the crazy off the wall Barry, obviously played by Jack Black.  Barry is obnoxious and rude to customers but has a deep love for music and his friends.  Then there is the quiet and meek Dick, who looks like a cross between Michael Stipe and Moby.  It doesn't seem that Rob has changed much over the years and things are sort of at an impasse.  He is having one of those "What does it all mean?" things.

The story is structured as a sort of mixtape of romantic misery.  Rob talks directly into the camera and counts down his top 5 breakups of all time all while currently in the middle of another one.  His apartment is wall to wall records where he sits and wallows among the stacks upon stacks of vinyl.  He admits to being cursed in love and is determined to find out why.  "My guts have shit for brains". 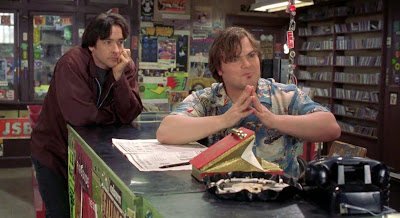 His current soon to be ex-girlfriend Laura says she has outgrown him and moves out. Later we find out that she has shacked up with there upstairs neighbor Ian (Robbins), a new age hipster douche bag.  Rob is full of typical male insecurities and when problems come his way he is usually reluctant to do anything about it, but now he is determined to track down the top 5 women who broke his heart and find out what really happens and if he really is cursed.  He has the support of his sister Liz, who is John Cusack's real-life sister Joan.  We also get some more top 5 lists and a short-lived fling with a beautiful musician played by Lisa Bonet.  Rob regains his self-confidence and realizes that he wants Laura back, but is it too late. This calls for the ultimate mix tape.  There are real honesty and truth to Rob's character and it shows on screen.  It's a fun movie to watch so don't let the words romantic comedy get in the way.

In the spirit of Rob here are my Top 5 movies starring John Cusack
1. Say Anything
2. High Fidelity
3. Being John Malkovich
4. 1408
5. Identity

You Can "Say Anything" But see this Classic Movie! 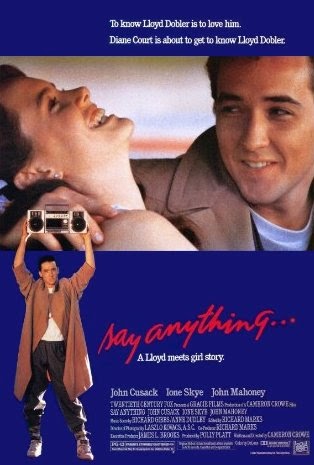 This classic 80s teen romance was the debut feature from Cameron Crowe who also wrote the script.  It stars John Cusack as Lloyd Dobler, a vision of what was going to hit in the early 90s, a sort of pre-grunge era.  Dobler's classic trench coat and laid back attitude set the tone for this story of surprising honesty and originality.  Ione Skye co-stars as , the school valedictorian and Lloyd's object of affection.  Lili Taylor and John Mahoney also give a memorable supporting performance.

Its graduation day for Lloyd and he has no set plans for his future except for maybe kickboxing.  He is the ultimate underachiever who lives with his sister and nephew, his friends are mostly female, most notably the guitar playing Corey (). Conversely, Diane lives with her dad and has won a prestigious fellowship to study in in the fall.  She's had little time if any to socialize with her classmates and has few relationships beyond her father (Mahoney) who runs the nursing home where she works.  Lloyd decides to call Diane after seeing her at graduation and talks to her father, he takes a message and adds it to the pile.  She calls him back and she agrees to go out with him to a graduation party.  Lloyd is a mixed bag of nervous excitement when he picks her up.  They seem to be the perfect opposites attract couple.  Lloyd is a complex character as he is smart and sympathetic, but also impulsive and directionless.  He lives for the now with no regard for the future.  They have a great time at the party, Diane finally gets to let go and have some fun and feel accepted with people her own age. 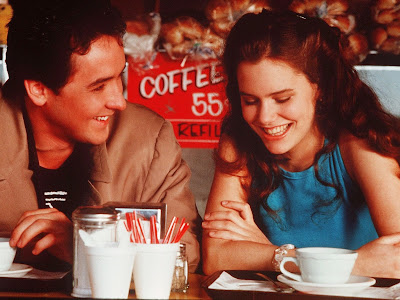 Diane only has the summer to be with Lloyd before she leaves for and must decide if Lloyd is worth risking her future for.  Her father is obviously opposed to their relationship.  Exactly how strong is their love anyway? Another interesting little distraction comes into play when the IRS comes knocking and ask to see the books for nursing home.  Diane's father has always done everything he could to support his daughter even it meant breaking the law.  She is put in a tough position as she is finally told the truth about her father.


Going against everything she feels and looking towards the future Diane takes her fathers advice and breaks up with Lloyd.  She gives him a pen wanting him to write to her.  Lloyd will not let her go that easily as he puts his heart on the line to get her back, with one of the most iconic scenes in teen movie history.  Across the street from her bedroom window, he hoists his boom box over his head and blasts their song Peter Gabriel's "In Your Eyes".  Of course, this would only work in an 80s movie.  After she learns the truth about her father she seeks out Lloyd at the gym and they get back together.  Lloyd is going with Diane to and will do what he does best, to support her and be there for her in whatever she does.