When it comes to Rachael Leigh Cook "She's All That" 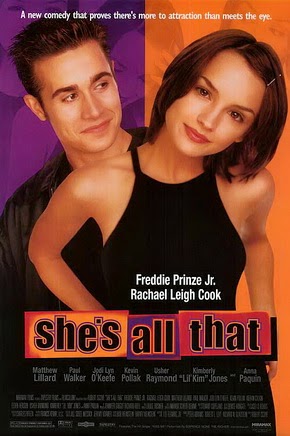 While the previously reviewed "Easy A" is a great example of the classic teen comedy done right, the 1999 film "She's All That" is quite the opposite.  This movie has been mocked and parodied to death, but is it really that bad?  Rachael Leigh Cook is the only reason to see this movie and she does her best with the material given. The rest of the cast is stocked with the late 90's version of the Brat Pack: Freddie Prinze Jr., Matthew Lillard, Anna Paquin, a young Paul Walker not to mention others.

The story is packed to rafters with cliché piled on top of cliché.  Cook plays Laney Boggs, a "nerdy" artist type.  Her clothes are splattered with paint, her hair always in a ponytail not to mention she wears glasses, by the rules of high school movies she is a hideous freak.  We then arrive at the jumping off point to our familiar story.  Prinze plays Zack Siler (not to be confused with Stewie's Family Guy Parody Zack Sawyer) the jock and hottest, richest guy in school.  His equally rich bitch of a girlfriend has just dumped him right before the prom, dude bogus!  He was dumped for a conceited douche bag (played by Matthew Lillard) who claims to fame was being on the MTV's "The Real World".  On the rebound and looking to change things up a bit Zack and his friends make a bet he can turn any girl into the prom queen.  Right on queue, the messy and clumsy Laney stumbles on by. Little does he know that through Laney he'll learn more about himself and loving another person than he ever thought he could. (silent giggle). 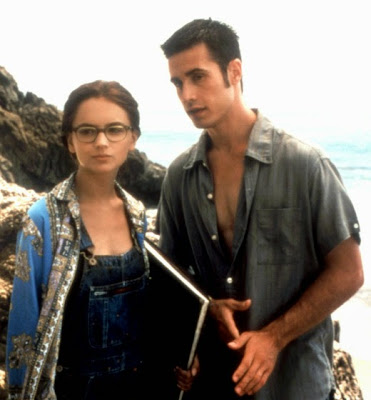 First of all, Laney is obviously the hottest girl in school even in her "ugly" phase.  She's smart, expressive, and a strong independent girl.  Smelling his bullshit a mile away Laney keeps her distance but he is very persistent.  She eventually gives him a chance and they start to bond.  Before going to their first big party as a couple, Zack's sister Mackenzie (Anna Paquin) comes over to make Laney "pretty".  This consists of taking off her glasses, cutting her hair and putting some make-up on leading up to the grand staircase entrance/reveal.  The party turns out to be a disaster and leaves Laney feeling more alone than ever.  Zack is also still harboring some strong feeling for his old girlfriend Taylor.  Then Laney becomes aware of the contest she kicks his ass to the curb.  Coincidentally also becomes available and wants Zack back bigtime.  Does he go back to his old cheating girlfriend or try to repair things with Laney?  Not so fast Zack, in the meantime his best friend Dean (Paul Walker) has eyes on Laney and she uses him to make Zack jealous.  But like all teen movies, everything comes to head at the prom, where for some reason there is a big choreographed dance number and everyone is a professionally trained dancer.

Teen movies follow a pretty strict formula and very rarely do anything original or daring. "She's All That" is a used textbook example, but as I said, in the beginning, Rachael Leigh is pretty awesome in this.  She really is all that.  So if your lookin' for some cheesy romantic 90s nostalgia this is quite the goldmine. 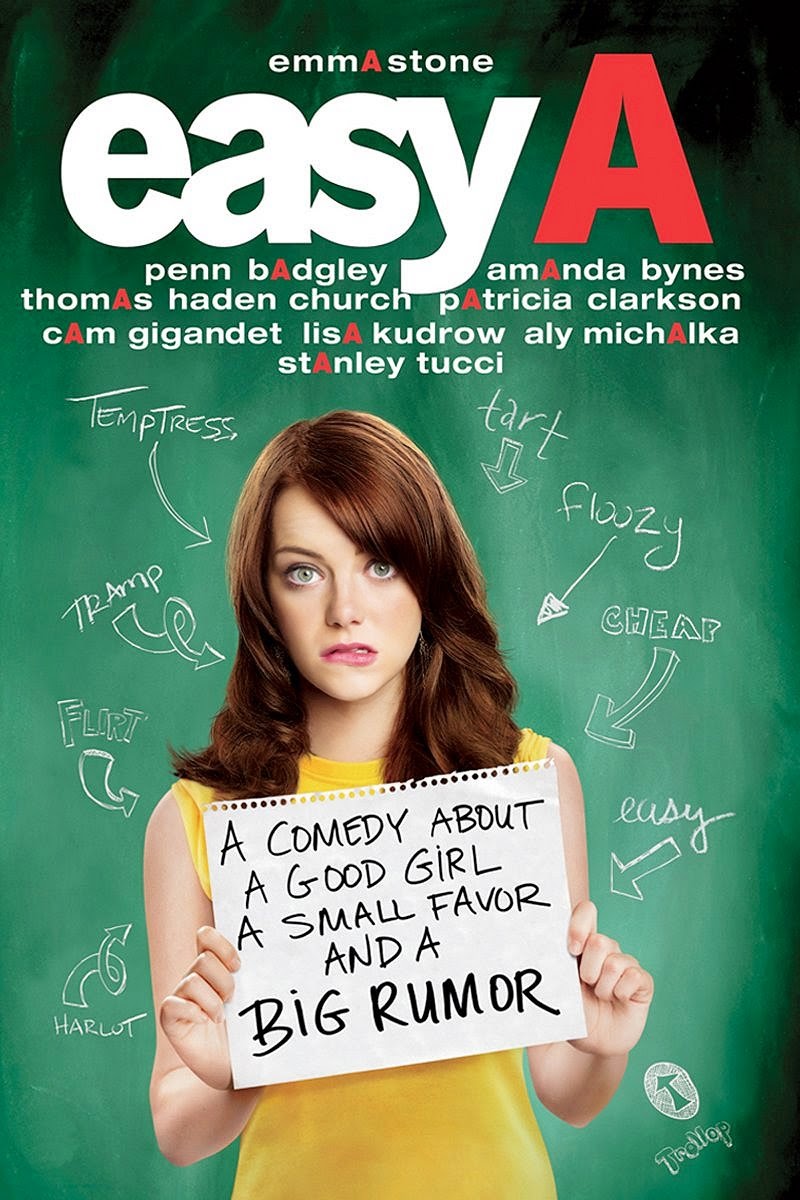 "Easy A" was the surprise sleeper hit in the fall of 2010 and propelled the funny and charismatic Emma Stone to Hollywood stardom.  This movie was surprising because it's not the 1980s or late 90s for that matter and the chances of a teen comedy being successful, funny, and profitable all at once are pretty rare.  But every generation needs its "Breakfast Club, American Pie, etc.  A movie that portrays the modern teenage experience.  A film that is honest and relatable without being cheesy or pandering.  "Easy A" is all of these and will take its place in the hall of fame of great teen comedies.

Emma Stone plays Olive Pendergast, a sort of revamped Molly Ringwald for today's generation.  The film knows its place in teen movie history and its crush on the 80s is very apparent with numerous reference all the way to the big ending.  This is not a bad thing but a wonderful homage to the memorable films that preceded it.  The story as a whole also plays like a modern retelling of "The Scarlet Letter" with Olive being Hester Prynne "Except without Demi Moore and all those bubble baths"

It started with a lie.  To get her best friend off her back about losing her virginity Olive says she slept with an older guy.  In literally a few hours the whole school knows and now the once clean-cut Olive is the newly minted school slut.  Lies and rumors are the foundation of any high school society and now Olive has to figure out her next move with the help of her closeted gay friend Brandon played by Dan Byrd.  Brandon feels frustrated and depressed for not being able to be who he really is so they make a deal.  Olive pretends to sleep with him at a party so everyone will think he is straight, just until he gets through high school.  She then plans to give the people what they want and become the biggest phony slut she can be.  Word of the deal leaks out and guys start approaching her wanting the same deal.  They offer her money (she prefers gift cards) just to be able to say they did things with her.  She even starts to dress the part complete with a red "A" or a scarlet letter.  This eventually becomes a problem and things get a little too real and she must try to put a stop to it.  She plans to tell the whole story in a webcast that is played sporadically throughout the film.  This also plays havoc with her own crush on Woodchuck Todd, the school mascot and a long time friend that she has feelings for. 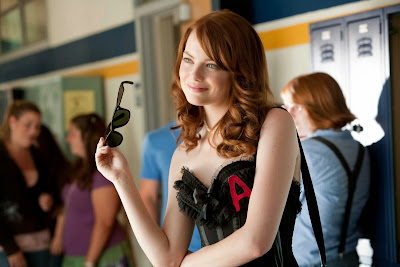 Emma Stone is not alone as the supporting cast is phenomenal.  Her cool and progressive parents are played by Patricia Clarkson and Stanly Tucci, who is normally seen in dramatic roles so it was quite the refreshing change.  It's also refreshing that their characters are portrayed as real people and not the clichéd movie parents that just don't understand.   Thomas Hayden Church is Mr. Griffith a no-nonsense teacher that is looking out for Olive and concerned about her recent changes.  Lisa Kudrow has a small but essential part as the school guidance counselor, who also happens to be married, Mr. Griffith.  Before losing her mind and wondering off to crazy town Amanda Bynes plays a Christian Jesus freak named Marianne, Olive's arch enemy.

The script is clever, sharp and witty throughout.  It's satirical, heartfelt and just a heck of a lot of fun.  Now that I've run out of adjectives to describe this little piece of awesomeness it's time to "bucket list this bitch"