The Darker Side of Robin Williams "The Big White" 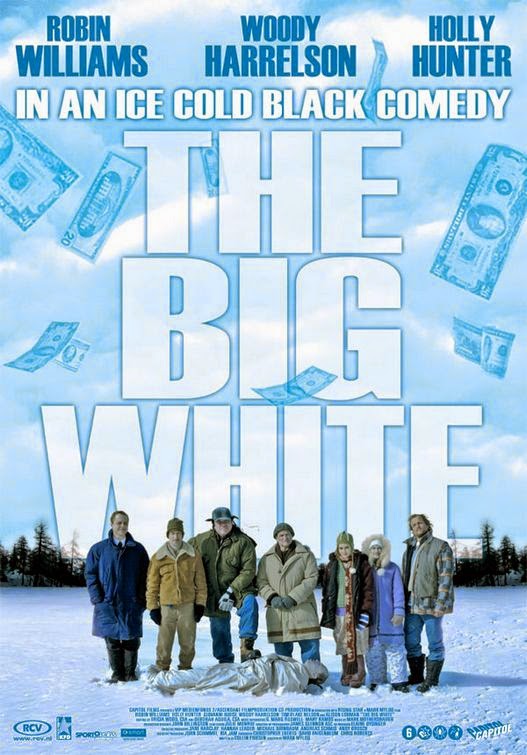 Released in 2005 "The Big White" is a dark comedy with a talented ensemble cast.  Like the previously reviewed "Insomnia" the story takes place in hence the title "The Big White".  While it was independently financed and played a number of film festivals it never made it to theaters but went straight to DVD.  It's a fun movie never the less, with a fine performance from the whole cast.

Robin plays Paul Barnell who runs a struggling travel agency.  He is married to a more than a little eccentric Margaret played by Holly Hunter.  Margaret has some sort of mental disorder that is not identified, but from that comes a bunch of disturbingly funny scenes.  They have a wonderful marriage and Paul will do absolutely anything for her, which is what puts the whole movie in motion.  Paul is in deep financial trouble and is looking for any kind of money he can get his hands on.  His brother Ray (Woody Harrelson) has been missing for a few years so he tries to cash in on his life insurance policy.  The problem is there is nobody and he needs to be missing for seven years to be declared legally dead.  In despair, Paul needs another plan, which he finds in a rather unusual place, the dumpster outside his business.  A couple of low-level thugs, kind of in the vein of Laurel and Hardy, have just dumped a body there and Paul is desperate enough to do anything.  There is plenty of dead body humor as Paul uses the corpse to pose for his missing brother.  While he waits for the insurance company to process his claim, fraud investigator and ghostly white Ted (Giovanni Ribisi) smells a rat.  Ted's girlfriend Tiffany (Alison Lohman) runs a telephone psychic scam and talks frequently with Margaret.

Things start to get a little messy for Paul when the goons come back for the body and its missing, but
worst of all crazy Ray comes back into the picture looking for his piece of the insurance money.  Knowing that Paul took the body the goons, who we later find out are gay lovers, take Margaret hostage in a home invasion.  Margaret puts up a pretty crazy fight even when she is tied up.  Paul is taking heat from every angle.  He must find a way to control his psychotic brother, save Margaret, and lose the obsessive Ted.

It's rare to see Robin Williams plays the straight man in a comedy.  Paul is a grounded and sensible man whose desperation gets him into some sticky situations.  He is surrounded by crazy off the wall characters that make him stand out even more.  The style of comedy is like midnight in the desert, dark and very dry.  It's not for everyone but for a few adventurous people its pure gold.