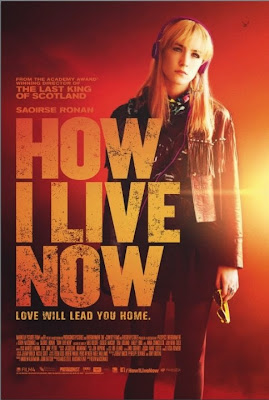 
For part 3 of my Saoirse Ronan trilogy of reviews comes the 2013 Film "How I Live Now" by acclaimed director Kevin McDonald who has "The Last King of Scotland" and "Touching the Void" to his credit.  "How I Live Now" mixes together a few current popular genres and comes out better than some, but is still pretty run of the mill.  It debuted at the Toronto Film Festival in 2013 but didn't make it to theatres.  Instead, it had an On-demand release last fall and is currently out on video and Netflix.

"How I Live Now" is a teen love story in the shadow of an apocalyptic crisis.  Angsty American teenager Daisy (Ronan) is sent to live with her cousins in the English countryside for the summer just days before a nuclear bomb detonates in .  Initially, Daisy comes off as a bitchy American stereotype who lives by her own set of strict rules.  Her inner thoughts and anxieties are played as a voiceover when Daisy is by herself and does make her more interesting and a bit more dimension.  She has two younger cousins, a boy (Isaac) and a girl (Piper), and the older Edmund.  Daisy instantly has a crush on the strong and stoic Edmund.  Some "Twilight" threads can be seen but are kept to a minimum.  Her Aunt Penn is a workaholic who always has a phone attached to her ear and a computer screen to her eyes.  She has a government job and is found running nuclear fallout scenarios.  She leaves for for a few days but never returns. 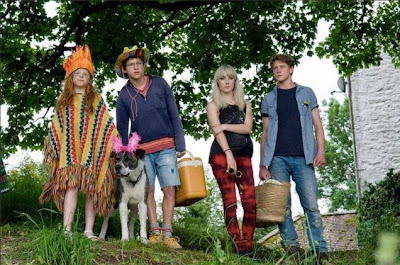 While the kids are all frolicking in a field an enormous explosion rocks the earth and moments later ash falls like a dirty snowfall.  Things have just gotten serious and martial law is invoked.  Daisy starts to drops her "act" and becomes a more real and authentic person.  The things that really matter come into focus.  Caring for her cousins and helping Eddie secure the farm.  Daisy and Eddie have turned an important corner in their relationship when the terrorists raid the farm and separate the girls and boys.  They have them working in internment camps and living with foster families.  Now the only thoughts on Daisy's mind are to protect her cousin Piper and to reunite with Eddie and Isaac.

When the war reaches the camps Daisy and Piper escape.  On their journey back home they pass by a downed airplane, an abandoned refugees camp, and numerous shady characters.  Daisy is a stronger person than she thought as her hope and determination help them both along the way.  The story and structure a quite formulaic although there is a couple of shocking moments to ground the film.  When it comes down to it your basically getting a teen movie masquerading as an important adult film.  As I mentioned before it's by no means a bad film, but kind of like my grades in high school, just a step up from average.