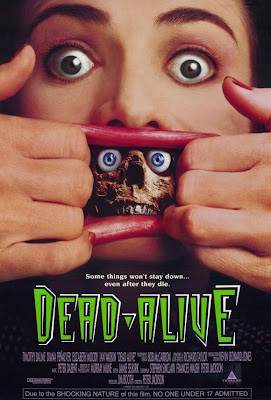 Before his "Lord of the Rings" fame, a young Peter Jackson gave us the 1992 cult horror phenomenon "Dead Alive".  It's many things to many people, but here are a handful of adjectives that sort of describe what you're in for.  it's cheap, cheesy, horrific, hilarious, disgusting, insane, wrong and entertaining all at once.  It's also packed with past horror movie homages, with none greater than Sam Raimi's "Evil Dead".  From it's over the top gross-out gore to its all-out slapstick humor.

Taking place in in the late 1950s, Lionel is a grown man living with his mother.  His father died at sea will trying to save him and he feels responsible for his death.  His mother is strict and against Lionel meeting and seeing any other women but her.  Although the local grocer's daughter Paquita has her eye on him.  They end up going on a date to the Wellington Zoo, but his mother spies on them only to get bitten by a Sumatran Rat Monkey.  The monkey is done completely with stop-motion animation in a nod to the great Ray Harryhausen movies of the time.  It doesn't take long for Lionel's mother to die and come back to life as a flesh-hungry zombie.  Her nurse is then turned and Lionel and Paquita have quite the mess on their hands both literally and figuratively. 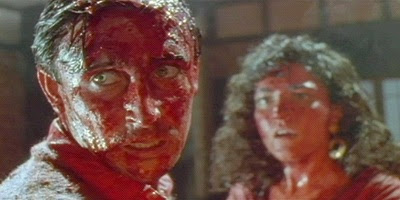 Events start to escalate quickly and just as soon you think it can't get any more bizarre.  From the Nazi veterinarian to the zombie killing priest who spouts "I kick ass for the lord!" after laying down some sweet Bruce Lee moves on a group of the undead.   Then you get the party scene and the lawnmower.  This is possibly the most batshit crazy gory/funny scenes you'll ever see.  Lionel finally has to deal with his mother who has transformed into what looks to be a gigantic paper mache beast.

"Dead Alive" has a certain vibe to it. Its far from movies like Hostel and Saw as the violence is so over the top it's funny.  The characters seem to be from a 50's sitcom stuck in a B-horror movie.  I know that probably doesn't do it the justice it deserves but any horror fan needs to see "Dead Alive".