"Off The Map" is out of this world! 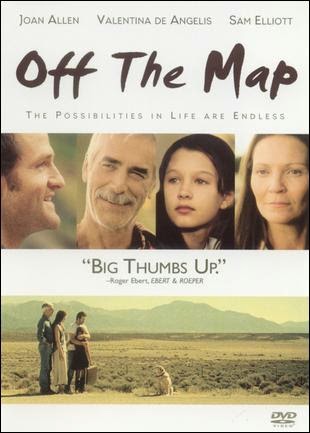 In the vein of the previously reviewed "The Ballad of Jack and Rose", "Off the Map" contains some of the same themes but came out two years earlier in 2003.  Veteran actor Campbell Scott goes behind the camera to direct his third feature about a small family living off the grid in .  Based on a play by Joan Ackermann the story is told through the eyes of a precocious 11-year-old girl named Bo, played by Valentina de Angelis, during one summer sometime in the 1970s.

Sam Elliott and Joan Allen play Bo's parents Arlene and Charley.  Charley is going through a crippling depression, while Arlene struggles to keep the family afloat.  They have help from Charley's brother George, played by J.K. Simmons, who helps out when he can.  Although Charley won't see a doctor Arlene gets George to go in his place to see if he can get some drugs to help him.  This idea works out better for George in the long run.  The family as a whole is pretty self-sufficient and lives without many of the comforts of modern life, but are none the less happy and content.  To add to their troubles they find out that they are being audited by the IRS.  Not having filed a tax return in years has finally caught up with them.  Although it doesn't even seem necessary the way they live. 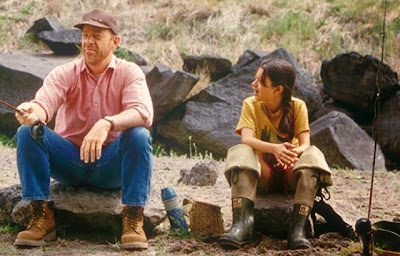 Lost soul William Gibbs is played by Jim True-Frost and is the newly appointed IRS agent assigned to the family.  As soon as he steps foot onto their land his life is forever changed.  Originally from the east coast, he is entranced by the majestic scenery. Not to mention to seeing Arlene nude in her garden.  A bee sting is a final incident that awakens his spirit.  He has a major epiphany that propels him to become a great artist, like many others before him.  However, your epiphany experience may differ.  Since he must have been allergic to the bee sting, he is laid upon their couch for several days in a feverish state.  Since the family has few visitors Bo has an instant crush on him and stays by his side when she can.  Her main contact with the outside world is pretty clever.  She writes complaint letters to food companies, who in turn send her boxes of free stuff.  She has a big personality and is full of wonder but is stifled by her current arrangement.

William's appearance may also be the trigger that will snap Charley from his current funk.  They are almost like a pseudo psychiatrist to each other.  Both men are damaged and have a hard time talking about things that have happened to them.  "Off the Map" is a character drama that brings you into these peoples lives and continues to amaze.  The acting is phenomenal and I know its a huge cliché but the scenery is a big character in itself.  "Off the Map" is definitely one to check out.