"My Summer of Love" is Unforgettable 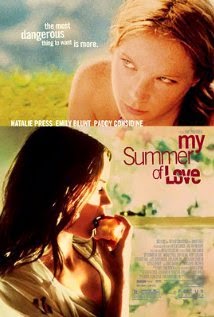 Internationally acclaimed Polish director Pawel Pawlikowski's third feature film "My Summer of Love" proves he is as advertised. This is an amazing film that deals with class structures, lusty obsessions and searching for a place to belong.  This was also the first major film role for Emily Blunt, who now has made quite the career for herself.

Taking place in Northern England Blunt plays Tamshin a bored rich girl home from boarding school for the summer.  While riding her white horse she finds Mona lying in a field.  Played by Natalie Press Mona is a red-haired tomboyish girl who lives with her brother Phil (Paddy Considine) in their families dilapidated Pub, which is now being turned into a prayer space.  Phil is a recovering addict and born-again Christian which infuriates Mona.  Their parents are no longer living and she is feeling disconnected from her brother and life in general. Tamshin takes an immediate interest in her and a friendship is born. They bond over secrets and bottles of wine. Tamshin's sister died from anorexia and her dad is having an affair.  The girls' relationship grows quickly and Mona becomes more and more obsessed with Tamshin's world.

Phil is equally obsessed with saving people's souls, including that of his sister.  Like Noah constructing an arc, Phil constructs a giant cross.  Near the end of Summer, with help from townspeople, they march the cross up a hill and place it for everyone to see.  Although coming from completely different backgrounds neither Tamshin or Mona have any strong religious beliefs.  Unable to put up with Phil's phony religious bullshit any longer, Mona packs up and leaves.   She hopes to run away with Tamshin and live happily ever after.  But this is far from a fairy tale.  As Mona shows up at Tamshin's she is in for a devastating revelation.  "My Summer of Love" is more than your typical coming of age movie.  It's digging deep into theses character psyche's and the actors realize this to maximum effect.  This film is currently on Netflix Streaming so see it tonight.