"Shaun of the Dead" The Best Zombie Comedy Ever Made! 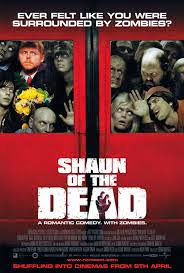 It has been nearly 10 years since the release of one of the greatest zombie movies ever made.  This film started the infectious zombie craze that still lingers today.  I'm talking about Edgar Wright's "Shaun of the Dead" starring Simon Pegg and Nick Frost.  A cult fanboy film from the start "Shaun's" mix of dry British humor and graphic zombie violence has made its claim as one of the best.  Its a romantic comedy with zombies.  It's a buddy picture with zombies.  It's many things to many people, but above all, it's just a fun movie.

Simon Pegg plays Shaun, a regular guy who likes nothing more than to spend time with his friends at the local pub called The Winchester.  His best mate is Ed an overweight and crude but harmless schlub who has been friends with Shaun since primary school.  Liz is Shaun's way too hot girlfriend who is fed up with their stale and predictable relationship.  Shaun also lives with his older and more put together brother who tells him to "Get your shit together!".   Shaun works as a supervisor at an electronics store with a bunch of unmotivated chowder heads who don't pay any attention to him or what he has to say.  To round out Shaun's circle of people is his kind but spacey mum and cold and stern stepfather Phillip, played by Bill Nighy. 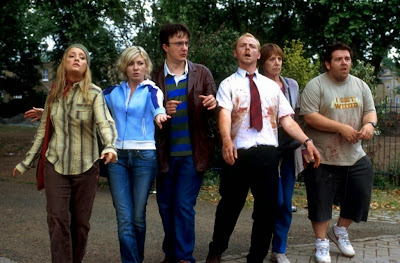 After a long night of drinking at the , Shaun's usual surroundings start to look a little off. Unknown to him and Ed it seems that the zombie apocalypse has struck.  It's kind of hard to notice these things when everybody acts like zombies in their everyday lives.  Shaun and Ed finally come to the conclusion that something is not right and hatch a plan to rescue their friends and family and find a safe place to wait out this annoying apocalypse thing.  The premise is simple but extremely well done.   The script is packed with several memorable one-liners and gags that make it fun for multiple viewings. 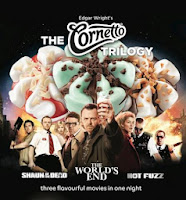 With their true to life characters and the smart insightful dialogue, filmmaker Edgar Wright and Simon Pegg, seem to be channeling Kevin Smith and his debut film "Clerks".  Along with 2007's "Hot Fuzz" and 2013's "The World's End," these three films created the "Cornetto Trilogy". A Cornetto being an ice cream cone something like a Drumstick, that appears in each film.  If it isn't already obvious "Shaun" is a movie that should be bought and watched regularly.