"The Pact" Cannot be Broken 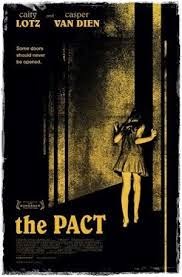 A sleeper hit in 2012, "The Pact" directed by Nicholas McCarthy melds many common horror themes into one thoroughly haunting and creepy movie.  Actress Caity Lotz, who looks a lot like Lindsay Lohan but without the baggage, plays Annie, who comes back home to attend the funeral of her estranged mother only to find the house she grew up in is still hiding secrets.

The film opens with Annie's sister, a recovering drug addict, already at the house and Skyping with her daughter.  The next day as Annie arrives (on a motorcycle) her sister is nowhere to be found.  Thinking she is just on another bender, Annie doesn't put much thought into it.  The house itself just has an altogether uneasy feel to it with its overabundance of religious artifacts and of course, it's old and creaky doors and floorboards.  There are also times when Annie is roaming around in the dark investigating noises.  All these scenes feel necessary to build the suspense of the scenes to come and really don't feel forced like many other films do.  After her mothers funeral, Annie meets up with her cousin, who is looking after her little niece.  They end up staying overnight at the house but vanish when Annie comes looking for them in the morning. 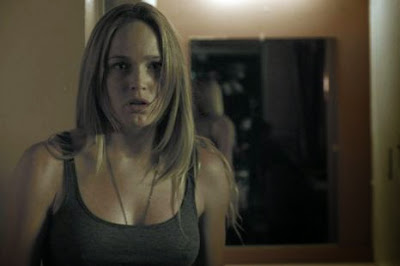 When Annie suffers a frightening incident of her own at the house she goes to the police and enlists the help of Officer Creek to further investigate.  What they find is quite disturbing and tries to offer some explanation as to what's been going on.  Annie does some investigating on her own and with some ghostly help unearths some troubling family history.  She also gets some help from Stevie a girl she knew from high school, who just happens to be blind, and a medium, and looks extremely pale.  Weird I know but just go with it.  With the help of some supernatural forces, Annie must deal with the very real threat that lives within the walls of the house.

"The Pact" is well made for its budget, even if we've seen some of this stuff before.  The story is well structured and thought out, with some wonderfully creepy characters and tense feeling throughout. A sequel has been announced but don't hold your breath.