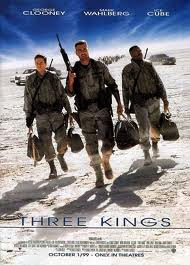 Over the past two years, Director David O. Russell has struck Oscar gold with "Silver Lining Playbook" and "American Hustle".  Attaching rising megastars Jennifer Lawrence and Bradley Cooper to both hasn't hurt either.  Back in the late 90s, Russell's first commercial hit was the Gulf War action/satire/adventure "Three Kings" starring a platoon of rising stars including George Clooney, Mark Wahlberg, Ice Cube.  Obviously, they were all known but Clooney was coming of TV's "E.R." and Wahlberg and Ice Cube we're mainly known for their music careers.

The story is stationed in at the end of the Gulf War in '91.  Saddam and his forces have been sent packing.  With no major fighting, the American troops are painted to look like a bunch of bored teenagers looking for any action they can get into.  Many wondering why were there in the first place.  Here's a not so subtle hint, they have a lot of oil, and the first President Bush was protecting his investments.  American forces are preparing to get the hell out of the desert when Barlow (Wahlberg), Vig (Spike Jonze) and (Cube) find a map to one of Saddam's stolen gold bunkers hidden in a surrendering Iraqi man's ass.

Clooney plays Archie Gate a special forces guy who when not screwing the media, literally, is just waiting out the war so he can retire from active duty.  Gates come across the guys and the map and decides they can make a quick and quiet in and out strike to snatch the gold.  But of course things happen and they underestimate the danger of their secret operation. 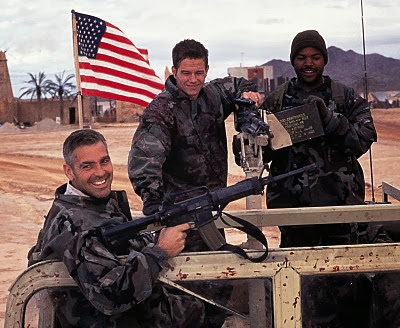 Their plan to just grab the gold and run hits a snag when they witness Saddam's Republican Guard soldiers brutalizing and killing civilians.  They can't help but get involved in their struggle, but being only a small unit they quickly get in over their heads.  They eventually find the gold, but gold is really heavy and can be quite cumbersome to transport.  Things get serious were Barlow is taken hostage and Vig is hurt.  They get help from the locals but it's going to cost them.  The action is amazing as well as the visual style from overly bright and bleached out colors of the desert to the sound design.  There is also a dark satirical thread throughout as well as more overt humor.  It's a fun film all around.

"Three Kings was the pinnacle of the first part of David O. Russell's career as his next film was the unbelievably awful existential film "I Heart Huckabees".  It took six years for his next film and a return to form with "The Fighter".  Russell is an extremely talented director and will always be interested in his upcoming films.