"Autopsy" A Movie with Guts but No Heart 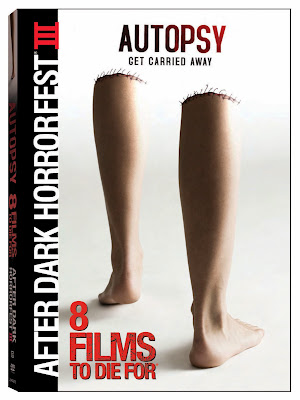 "Autopsy" was apart of the After Dark Horror Fest 3 which was a collection of eight movies released in 2009.  Keeping with my current theme of movies featuring insane doctors and medical madness, "Autopsy" fits the bill with mixed results.  With an extremely simplistic plot and generic characters, all the movie has to offer is shock value.  Most of it is pretty creative and gross but still unable to support any sort of story.

A group of college kids are partying at Mardi Gras having a fun time, but when they get back on the road to wherever they're going next they accidentally hit a man in a hospital gown who comes running out of the woods.  A few moments of panicked arguing and finding out their cell phones can't get any reception an ambulance shows up out of nowhere.  Hesitant at first but the paramedics take the kids back to an eerily empty to get checked out.  An older nurse runs the show up front as Dr. Benway takes care of thing behind closed doors. 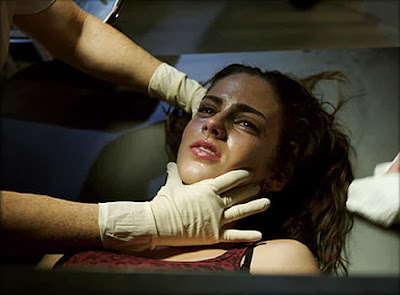 In typical horror movie fashion, they are quickly split up, some just wander off to explore the dark and spooky building, while others are taken by the orderly to be fodder for the doctor's experiments.  Emily is the girl we follow the most and will undoubtedly be the final girl who will have to fight for her life against the doctor and other crazies.  When things start to go bad Emily is able to call for help and a lone police officer shows up.  It's no surprise that he doesn't last more than a few scenes before he is taken out.

The character of Dr. Benway is pretty weak and uninspired for being the main bad guy.  He is not scary, threatening, or all that interesting.  He has a very thin and clichéd backstory and most it leads up to a few shocking gore filled scenes at the end.  The gore and effects as I have said are pretty good, but this is a strictly by the numbers horror film that will drift off into obscurity.  One final note for those interested the film was scored by Joseph Bishara, who has most recently done the two "Insidious" movies.