"American Mary" will Freak you Out! 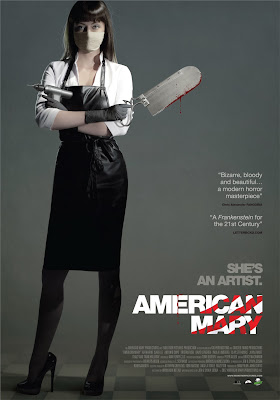 The body modification subculture is sort of the like the old time carnival freak show. People surgically mold, sculpt and pierce their way into something else but the person on the inside stays the same.  The 2012 film "American Mary" features Katherine Isabelle, the breakout star of 2001's "Ginger Snaps", as a Med student who finds herself performing body mod surgeries that she finds out is quite good at.

Being a poor college student Mary Mason answer's a Craig's List style ad for a sleazy strip club owned by an even sleazier younger guy.  During her "interview," something goes terribly wrong outside and Mary if offered $5,000 to do some impromptu surgery on some guy.  She is freaked out but does it.  Word gets around to the underground body mod culture and she is approached by some pretty strange characters to help them finish their work.  Isabelle plays Mary perfectly, she is desperate enough to take these strange jobs but is still grounded and very professional.  She provides a desperately needed service to the extremely rich who believe she is an artist who works in the medium of skin. 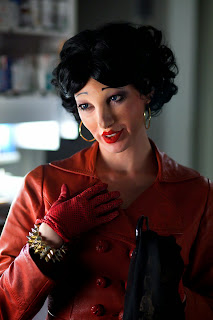 She is first pursued by Beatrice who has transformed his/her body into Betty Boop.  After completing surgery on her for $10,000, her friend Ruby comes calling next.  Rudy is transforming her body to look like an anatomically incorrect Barbie Doll and has a few things cut off and one thing sewed up.  The film has a darkly comedic thread throughout.  Ruby, Beatrice, and the others are all portrayed as good people on the inside, but different on the out.  While the exact opposite is true about the other so-called normal people.

Back at school, Mary is invited to a swanky party thrown by one of the big shot surgeons, but she has unknowing just stepped into the lion's den.  She is drugged and raped by the surgeon, but little does he know the unique skills that Mary has recently acquired.  Mary exacts swift and painful revenge upon the Doc.  Making him her test subject for new procedures, keeping him alive and aware the whole time.

"American Mary" is full of interesting unique characters and well played throughout.  It was written and directed by the Soska twins, Jen and Sylvia, who also play parts as customers to Mary.  They bring a real sense of authenticity and care to the film, that would have been lost had it been done by anybody else.