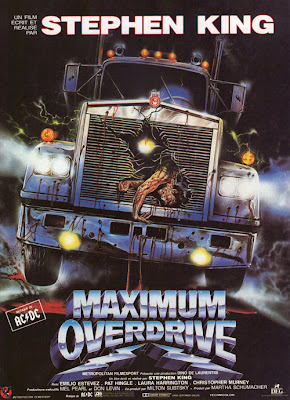 In 1986 famed horror writer Stephen King stepped behind the camera to personally direct his one and only movie.  "Maximum Overdrive" is based on his short story called "Trucks" and stars Emilio Estevez as Bill Robinson, a short order cook at a truck stop who must save the day from a bunch of evil self-driving big rigs.

A comet passing by Earth triggers machines to start going haywire.  Pop machines shooting lethal cans of pop, Lawnmowers running amok and big trucks out to kill.  Yes, it's just as ridiculous as it sounds.  All played to several songs by AC/DC.  The comet is said to remain in the Earths atmosphere for eight days, but will humanity survive?  The never-ending battle between man and machine is resumed.  To quote the waitress "We made you, we made you!"

This is an appalling stupid movie but works as a sort of trashy fun entertainment.  The events take place at the Dixie Boy Truckstop in Willmington, North Carolina, and has its share of stereotypical southern characters. The cigar-chomping owner who calls everyone Bubba.  The slightly retarded grease monkey attendant.  There is also the story of an annoying just married couple and a twelve-year-old little leaguer.  There are several characters that I assume came from the short story, but on film, they seem quite one dimensional.  Estevez does his best with the material but its quite the step down from the previous year of 1985 when he broke out with "The Breakfast Club" and St. Elmo's Fire".  I'm sure he got paid and I don't blame him for cashing in on his newfound celebrity.

With the Stephen King name, this movie gets instant recognition but viewer beware.  Surprisingly it's unavailable from Netflix as the DVD is out of print.  Although if you still really want to see it go over to Amazon On Demand.