Spend a Night with David Cronenberg and "The Brood" 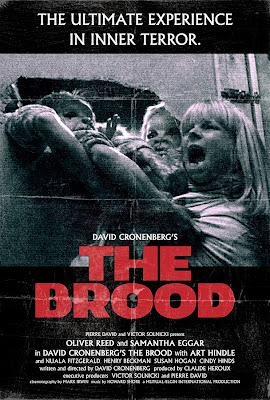 Canadian director David Cronenberg is the king of bodily horror.  Ever since his debut feature "Shivers" he has built a strong cult following with a long list of critically acclaimed films.

"The Brood" was released in 1979 and looks to be one of his most personal films.  It's about a dad fighting for the custody of his young daughter from his mentally unstable wife Nola.  Cronenberg himself was involved in a messy divorce at the time and this film looks to be his way of venting in some extreme and bizarre ways.  Art Hindle plays Frank Carveth, a father who after seeing signs of abuse on his young daughter, confronts his wife and psychiatrist.

The story begins with Dr. Hal Raglan showcasing his revolutionary new treatment called physchoplasmics.  Its a very theatrical approach as his patient, Mike, is on stage with Dr. Raglan impersonating Mikes father.  Mike then starts to develop these welts all over his body when they seem to have reached a breakthrough.  The doctor has also authored a best selling book called "The Shape of Rage".  He seems to be comparable to a modern-day Dr. Phil but in a very extreme sense.  Frank is furious with his wife and accuses her of beating their little girl Candace.  Candy as she normally goes by is a sweet and innocent little blonde girl who is very reminiscent of the girl from the "Poltergeist" movies.  But is she one of those devious and creepy horror movie kids or not? 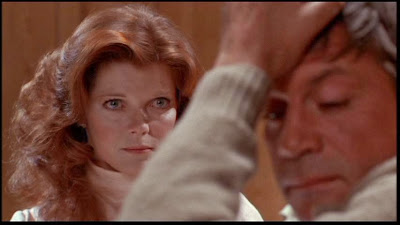 The story only gets more bizarre as it progresses.  Frank's mother in law, who is quite the lush, is   Candy doesn't seem to be to shocked by this.  Repressed anger and frustration play big roles in the film.  Candy's teacher Ruth Meyer is the only comforting female presence in Candy's life and Frank asks her to dinner to discuss her behavior.
babysitting for Candy one night when what looks like a little kid breaks into the house and bludgeons the grandmother to death.

After Franks father in law is also beaten to death by a childlike person,  Frank is this time able to kill the perpetrator and finds it to be a kind of mutated troll-like being with no genitals or belly button.  The source of these creatures or the brood is the disturbing secret to this mystery.  "The Brood" is about the bitter anger and rage that people go through during a breakup or divorce.  It's about betrayal and retribution.  There are also themes of the lasting effects of childhood trauma and how it shapes us as adults.  "The Brood" is definitely strange but it is also classic David Cronenberg.