Before You Die You Must See "The Ring" 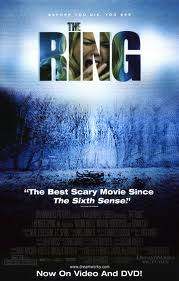 Based on the Japanese horror sensation "Ringu" the American remake "The Ring" launched the J-horror craze in the fall of 2002. Ever since several Japanese and Asian film have had remakes but none have had the power and success of "The Ring"

Before you die you see the ring.

Set in the wet and ominously gloomy city of single mother Rachel, played by Naomi Watts, works as a journalist who comes across the mysterious story of a video tape that has deadly consequences 7 days after watching it.  Her son Aidan is a strangely mature and articulate little boy who seems deeply troubled but he is just another part in the thoroughly creepy and inventive story.  The opening scene of two teen girls talking about the tape has been spoofed many times but effectively sets up the urban mythology of the killer tape and gets Rachel involved as the victim was a relative and one of Aidan's closest friends.

When Rachel starts to investigate she finds out that a bunch of teens that stayed in a cabin at some resort all watched the cursed video have all recently died.  So what would be the logical thing to do? Watch the video of course.  Rachel drives to the resort and stays at the same cabin, number 12, she views the short black and white video of bizarre images and immediately afterwards the phone rings.  When she picks it up a voice echoes 7 days and the countdown begins.  She enlists the help of ex-flame and current co-worker Noah to help her find out the origins of the tape. 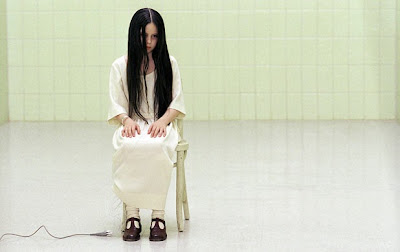 The technology portrayed in the movie is in that period where everybody still had the big tube television and VCR's were still hanging by a thread.  Those two things made all the difference in making it as creepy and scary as it is.  HDTV's and DVD's are just too cold and clinical.  The old technology has a worn in grungy feeling that is indispensable.  But also in a strange way the movie invented the term viral video.

Their research has lead Rachel to a horse farm on a remote island where what's left of the Morgan   The old patriarch Richard Morgan lives there alone with nothing to do but work the land.  His wife Anna had committed suicide years earlier.  But wait there's more, desperate for a child the Morgan's adopted a daughter named Samara.  Now this is a creepy kid and the key to the cursed video.  We learn the disturbing back story of Samara and the Morgan's and its Rachel's job to set things right and stop the curse.  Then comes the clever twist that sets this movie apart and brings us the movies signature moment.
family resides.

Almost three years later we were given a lame duck sequel directed by the guy to did the original Japanese version.  Needless to say the original stands alone as an entertaining and frightening experience.

"Excision" is the Right Decision for Horror 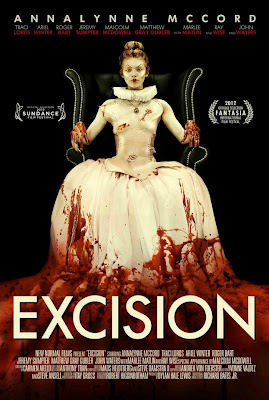 "Excision" is an exercise in angsty teen horror.  A shocker with many disturbing images in the shell of a well-worn story.  Actress AnnaLynne McCord goes "ugly" for her role as Pauline, a frumpy social outcast at school and at home.  Her younger sister Gracie is the favorite daughter who gets all of her parents and not just because she has cystic fibrosis.  Pauline's parents are pretty well cast with Traci Lords and Roger Bart (Hostel Part 2) chewing the scenery. Lords play the frosty evil bitch mother to Bart's weak and emasculated father to great effect.  Overall the movie is very well cast..  "The" John Waters plays a small part as a repressed Catholic priest to dry comic perfection.  There is also a cameo by Malcolm McDowell as a high school teacher.

Most of the horror and gory bits come from Pauline's demented dreams and fantasies.  She bathes in blood, microwaves a fetus, you know regular teenage stuff.   Although she gets bad grades and has no college plans, she dreams of becoming a surgeon with the ultimate goal of saving her sister.  Along with the gory and surreal dream sequences, there are also cutaways to her in a church kneeling and talking to God, not really confessing her sins, but trying to defend her actions. 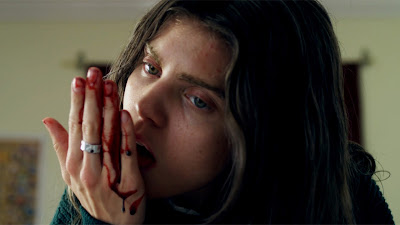 Pauline seems to hate everyone and everything except her sister.  She openly provokes her classmates  Although she does have a bit of sick fun in the process. She is eighteen and decides she wants to lose her virginity so she makes a no strings attached offer to a popular boy at school and they meet up at a motel.  She happens to be on her period and has the guy go down on her.  Needless to say, the guy is mortified.  The movie revels in any kind of vulgarity it can think of with Pauline being the queen of gross.

When Gracie's condition takes a turn for the worse, Pauline must put her final plan into action whether she is ready or not.  All those dreams and fantasies are now turning into reality and we see just how crazy and delusional she really is.  A last-ditch effort to win the love and approval of her parents.  "Excision" is an extreme version of the outcast teenage girl seen in countless other movies, but with pitch-black humor and a complete disregard to tastefulness.  I applaud the boldness of director Richard Bates Jr.'s decisions and if you're a fan of the films of John Water's you will probably like this one.