Get Stoked for "STOKER" from Chan-wook Park 
**This review could contain spoilers**

"Stoker" is famed South Korean director 's first English language film. He is mostly know for his Vengeance trilogy and the cult classic film "Oldboy, which is getting an American re-make by Spike Lee.  Park's films are intense and meticulously crafted.  They are usually pretty violent and push the limits all while being character centered and beautifully shot.  "Stoker" delivers the goods with a gothic tale of a young girls coming of age in a rich family

Starring the magnificent Mia Wasikowska as the only child of Richard (Dermot Mulroney) and Evelyn Stoker (Nicole Kidman). is quite the interesting character from the onset as the credits appear over freeze frames of her doing things that become more apparent at the movies end.  She wears clothes very unique to her generation and  although she is very pretty and "normal" looking she is and outcast at her high school.  She is quite introverted and has her own sense of style.  There are many things about her that lay just under surface and her arc throughout the film helps her realize who she is destined to become.

's father Richard is supposedly a wealthy architect who at the start of the film dies in car accident on 's 18th birthday.  At the funeral notices a man who turns out to be her world traveling uncle Charlie (Richard's brother).  Charlie seems to have a very strong interest in as he frequently approaches her at a party held at the Stoker's mansion.  Charlie, played by Matthew Goode, is a hansom and charismatic man who's mysterious appearance goes unnoticed by most of the guests.  Evelyn only knows that he has been traveling extensively in for some reason or another and know nothing of his past. 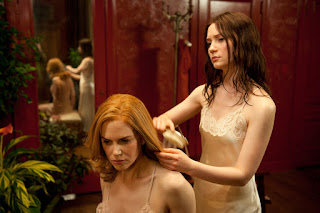 Evelyn is played brilliantly by Nicole Kidman and deserved a lot more screen time than she actually got.  Evelyn is a bored rich mans now-widow who seems to have no real purpose in life or reason for getting up in the morning.  She is an absent parent who gets no respect from her daughter.  The introduction of Charlie into their family (who now lives with them for an undetermined amount of time) does give her a sort of renewed vigor.  Although like in Nabokov's "Lolita" Charlie only gets close to Evelyn to be able to get closer to .

is not frightened by Charlie even after the disappearance of the maid Mrs. McGarrick and then Aunt Gwen, who stops by unannounced for a very awkward dinner. is intrigued by Charlie and something inside her opens up, something dark but also something that feels right.  Later that night meets up with a boy from her class and when things start to go south Charlie is there and they share in something that is both wrong and exhilarating.  This leads us to the shower scene with and a look inside her mind and how she feels about what just happen. 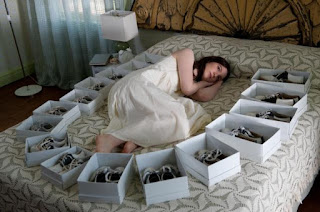 does eventually find out about Charlie's hidden past and his plans for the future.  She needs to free herself from her toxic family and create a life for herself, whatever that may be.  Charlie's obsession eventually boils over and when he threatens Evelyn, she must make a choice.  is able to escape her family, but deep down she is what she is.

crafts a beautiful looking film from top to bottom.  The atmosphere he creates as well as the photography are simply breathtaking.  Not to mention the awesome special effects work by Craig and Everett Byrom and company.  Ok, enough with the love fest I'm having for this movie there are a few drawbacks.  The script could have been a little better. The story itself is kind of weak and melodramatic but with such great talent all around it does pull off a pretty decent film.  "Stoker" is currently available on many formats such as DVD/Blu-ray/On-demand, etc.  So see it!