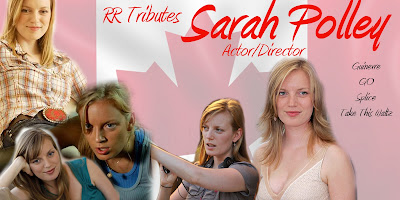 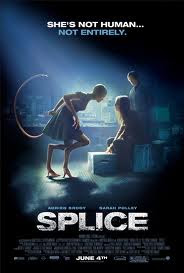 Canadian director Vincenzo Natali gave us the 1997 low budget horror/thriller "Cube" a Rockport Review favorite.  Years later and a few straight to video projects, his 2009 film "Splice" actually made it to theatres even it was for a short time. "Splice" is a sci-fi thriller in the vein of David Cronenberg's early work.

Clive and Elsa, played by Sarah Polley and Adrien Brody, are two hipster geneticists working on splicing the genes of several animal species together to make medicinal proteins for livestock with one day hoping to cure human diseases.  Their two star creations are Fred and Ginger, big red slug looking creatures who turn out to be more than they bargained for.  After a complete disaster at a medical conference showing off their creations, they are reprimanded by their big evil company and forced back to the drawing board.  But Elsa now wants to push the boundaries and splice in some human genes into their concoctions.  Although illegal and unethical they do it just to see what happens with the agreement that they will terminate the experiment before it gets out of hand.  The sample grows at an exponential rate and Clive wants to stop it but Elsa, the motherly figure, hijacks the project and a cute little creature bursts out of the lab tank it was being incubated in.

The baby creature scurries around the lab until Elsa captures it.  It looks like a kangaroo with tiny arms, a tail, and a big head.  Once caught Elsa cares for it while Clive only wants it gone.  Its quite the ethical dilemma and shows the cracks in their relationship.  She wants kids he doesn't.  Elsa names the creature Dren, which is Nerd spelled backward.  Nerd is the name of some biotech company that is written on Clive's shirt.  Dren still grows at an amazingly fast rate and starts to take on more and more human characteristics.  Elsa puts a dress on her and treats her like her own secret little daughter.  It starts to get harder and harder to hide Dren from the other at the lab so they move her out to Elsa old abandoned family farm.  Dren is unable to speak but can understand when talked too, like a really smart dog. 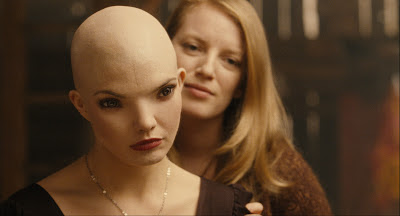 Things really start to get interesting an a little creepy when Dren grows up into a sort of teenager.  Since Clive seems to be kind of a douchey guy, to begin with he can't help but wonder what it would be like to hit that after initially wanting it dead.  Elsa is pretty insecure about herself and starts to feel some serious jealousy over Clive and Dren's relationship.  Fearing the worst Elsa straps Dren's naked body down to a table and cuts off the stinger at the end of her tail.  Feeling hurt and betrayed Dren is driven even closer to Clive.  Inevitably Clive and Dren do get down to business and Elsa, of course, walks in on them.  Ouch!  Needless to say, she is a little freaked out.  The third act goes a little off course, but it is still worth a watch.

Sarah Polley is the best part of this movie along with Delphine Chaneac who plays the grown-up Dren.  Sarah's Elsa looks to have dealt with a lot in her past and has issues connecting with other people.  She is pretty cold and closed off until she creates Dren who is more a part of her than Clive realizes.  Natali filmed the movie with strong blues and greys giving it a very cold and clinical feel.  The effects used are also well done with a unique and interesting opening title/credit sequence.  Make a double feature of it and see "Cube" and "Splice".