Let "Slither" Slide Across your Screen and Thank Me Later! 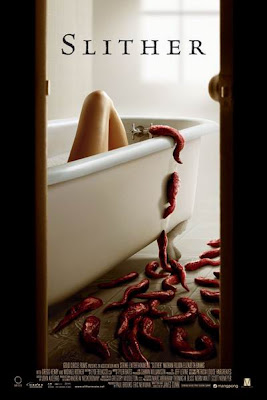 In the spirit of the cheesy monster movies of years, past "Slither" is quite an enjoyable film.  It's as funny as it is disgusting and bizarre.  Directed by James Gunn, who previously worked at famed B-movie studio Troma, brings the same attitude and felling to "Slither" although with a much bigger budget.

Taking place in this movie has a deep southern feel to it.  Starring Elizabeth Banks as Starla a young southern belle married to the much older Grant, whose last name is also Grant, played by the intense Michael Rooker.  The town sheriff Bill Pardy is played by genre icon Nathan Fillion.  Many other movies come to mind while watching this like "Invasion of the Body Snatchers", "Night of the Creeps" and many more.

We open with a meteorite crashing down in a wooded area of Wheelsey behind Bill and his partner's squad car as they whittle away an extremely slow and boring night.  We see  Starla and Grant have an argument and he heads off to the bar and picks up a local chick name Brenda.  There is also has another woman in the bar singing karaoke to "The Crying Game" which is pretty funny.  Grant and Brenda wander into the woods where he stumbles upon a giant slug-like creature that upon investigation shoots him with a sort of worm dart that takes control of his brain.  This also begins about his slow and gruesome transformation.  He now has an insatiable hunger for raw meat.  The next night while Starla waits for Grant at the big Deer Cheer dance she reconnects with Bill whose had a crush on her for years.  Grant is a no-show at the dance and Bill gives her a ride home as they talk and bond 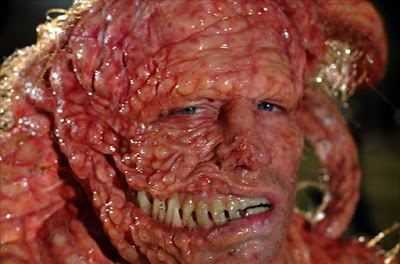 Probably the funniest character, although not initially, is the douche bag mayor Jack MacReady (MacReady was also the name of Kurt Russell's character in "The Thing").  He is an arrogant jerk who gets all of the best one-liners and his reactions to all of the mayhem are priceless.  Grant "impregnates" Brenda with his alien appendages who is then stuck into a barn and turns into a giant and I mean giant blob, who eventually explodes releasing tons of slithering slugs that go in through your mouth a turn you into a brain dead zombie.  Many of the locals get zombified and it's up to our heroes Bill, Starla and a teenage girl named Kylie, whose family was also turned, to save the day.  Grant is now a giant Jaba the Hut like creature with tentacles.  The final showdown is nothing too special but the movie as a whole is pretty crazy fun to watch.  "Slither is currently available on Netflix watch instantly.  The DVD version also has a commentary if your into that sort of thing.