"Henry: Portrait of Serial Killer" is a Character Study in Violence 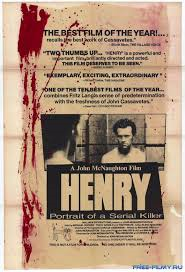 To quote Homer Simpson "Oooh portrait sounds classy".  This movie is the chilling and brutal story of serial killer Henry Lee Lucas, who along with his accomplice Otis killed an unknown number of people.  Also known as the confession killer for taking credit for hundreds and hundreds of killings.  Henry's actual number of victims is unknown, but he was convicted of 11 murders and sentenced to life in prison.  He died in 2001.

Directed by John McNaughton on a shoestring budget of $100,000,  "Henry" was filmed in with unknown actors in late 1985 and early 1986.  It marked the screen debut of Michael Rooker, who plays Henry, has gone on to have a prolific career.  Most currently playing Merle Dixon on "The Walking Dead".

Henry is loner living and is a part-time exterminator of bugs, then at night an exterminator of humans.  He lives with Otis another sleazebag loner who isn't too bright.  They met while serving time and now share a small prison-like apartment.  Otis also has a sister, Becky, who left her husband and has come to live with the serial killer odd couple.  Henry and Becky spark up a relationship and he protects her against the verbally and physically abusive Otis. 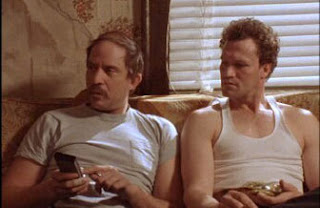 McNaughton opens the movie on a close up of one of Henry's victims (the orange socks girl) that was  We then see a few more gruesome crime scenes of Henry's work.  His tableaus of carnage.   This movie is not your typical horror movie, it's more of a pitch black character drama about violence.  Rooker is amazing in his performance as the remorseless and soulless killer.  Although Henry mostly killed by himself, he let Otis tag along and they became a team until Henry ultimately killed him too.  The movie is not a truly accurate account of actual events and some things were changed to make it a better movie.

"Henry" was completed in 1986 but wasn't released until 1989 as it had an epic battle with the MPAA over the film's rating.  Originally given an X rating, which was mostly reserved for pornography. "Henry" was one of the movies that led to the creation of the NC-17 rating (which is still a rating death sentence).  Meaning that the movie contains intense adult themes, but is not pornography.  Once released it really polarized critics, it received several rave reviews from critics like Roger Ebert (R.I.P).  It's an intense and unflinching look into the darkest corners of humanity.  Dark Sky Films released a 2 disc special edition in 2006 to commemorate the 20th anniversary of the film.  It has a commentary track from the director, an hour long making-of documentary, and much more. Check it out!