"Next Door" is Psychological Mind Bender 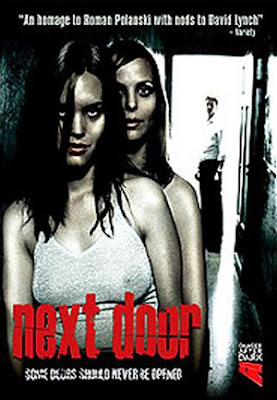 
"Next Door" is a Norwegian psycho-sexual mind bender, inspired by the likes of Alfred Hitchcock and David Lynch.

Taking place in an old apartment complex, John's girlfriend Ingrid has broken up with him.  She is collecting the few remaining things she has left behind, while another man Ake waits for her in the car outside.  John seems to be a regular mild-mannered guy, but Ingrid has an uneasy fear of him.  He doesn't know what he has done to make her leave and begs her to stay, but it useless.  While in the hallway John is approached by Anne the girl next door, she needs his help in moving a cabinet.  Anne lives with her sister Kim both women are young, sexy and mysterious.  Everything about the girls and their apartment is a little strange and you start to wonder about their motivations and exactly who they are.  The girls barricade themselves in their apartment with the cabinet in front of the door.  We are told that it is to keep out the man who attacked Kim, but then she denies that she was ever attacked and that Anne has made it up.

Things get progressively more bizarre for John as fantasy and reality start to merge.  There is something in John's past that's trying to break through.  Are Anne and Kim even real?  Throughout the story, John is on a steady decline until the end when everything comes to a head.

"Next Door" could easily be an episode of the "Twilight Zone".  It is short, compact and takes you on a very strange but interesting ride.  It is available on DVD and definitely worth a look.