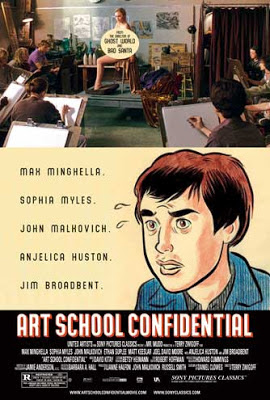 One of the greatest questions ever asked by mankind is "What is Art?"  "Art School Confidential", directed Terry Zwigoff and based on the graphic novel by Daniel Clowes, takes a satirical look at the art world through the students at the fictitious Strathmore college.

Jerome (played by Max Minghella) is a freshman at Strathmore who has dreams of being one of the worlds greatest artists.  His roommates are a fanatical film director, and a yet to come out the closet fashion designer.  The movie plays up all of the typical art school stereotypes in a very self-referential way.  Jerome forms a sort of friendship with Bardo (Joel David Moore) and he points out all of these clichéd students.  Bardo himself is the guy who has been there for seven years and changes his major each year.  There is also the crazy suicidal girl, the pseudo-intellectual guy, the hippies, the teacher's pet.  Also, the failed arrogant artist who decides to become a teacher in a desperate attempt to hold on to something that was never really there.  This is played by the always intense (and this time funny) John Malkovich as Professor Sandiford.  Art school is also a magical place where there is always two super hot uninhibited girls for every geeky guy.

Jerome is a regular guy and falls for the lure of the "glamorous" artist life.  He decides to go to Strathmore because he wants to meet Audrey (Sophia Myles) the beautiful nude figure model from the college's brochure.  To further fill out the full roster of interesting characters we have Broadway Bob (Steve Buscemi) who once a year gives one of the students a one-person show at his cafe.  Their is Jimmy the old alcoholic reclusive former artist who Bardo brings Jerome to for advice on life and art.  All in all, this is a great ensemble cast with interesting characters that you wish you could know more about.  As Jimmy tells Jerome one night "to be a great artist you just need to take lessons in sucking cock and licking ass"  Well put Jimmy! 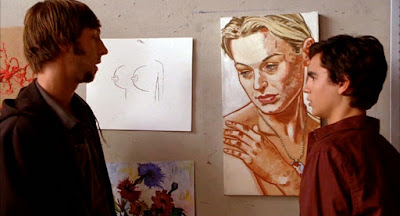 So Jerome eventually meets Audrey and after he paints her portrait in a class they become friends.  Audrey plays the part of the Muse to all of the popular up and coming young artists.  Everything they are doing in school builds up to the final showing and one and only grade.  So many things have been said about art over the centuries it's impossible to nail down what makes good art.  Is it just a popularity contest?  Is it the artist themselves and not necessarily the art? And on and on.  Jerome really does have some talent but how will he turn it into a career?  As Professor Sandiford states in class, "only about 1 in 100 of you will ever make a living as an artist"  I think he is being rather conservative.

The movie also has a side plot of a murder mystery involving the Strathmore Strangler which is a little more than strange, but it does involve a detective going undercover and becoming the most popular painter at the school.  Do you really need talent to be a great artist?  So many questions.  "Art School Confidential" is must see for anybody that asks these questions.  It doesn't offer any answers but its a pretty fun experience. 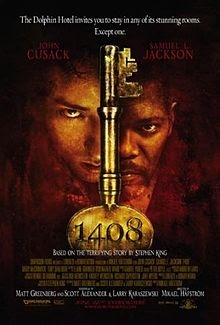 Master horror writer and cultural icon Stephen King has had over 30 stories adapted into movies or T.V. mini-series.  "1408" is one of the more successful film adaptations in recent memory.   Starring John Cusack in a sort of one man performance as Mike Enslin.  Enslin is a struggling writer who has just completed his latest book on haunted hotels.  He is a non-believer in ghosts and ghoulies and has lost his spiritual faith as well when his young daughter dies from a terminal illness.  He has turned into a cold and cynical man looking for something in life and just can't find it until he gets a postcard from the Dolphin Hotel in .

Mike is from but since the death of his daughter Katie, he has left his wife and moved to .  He receives all kinds of mail from across the country from supposed haunted hotels that want him to stay the night.  He is drawn back home to and the Dolphin Hotel as he seems destined to stay in room 1408.  Sam Jackson plays the hotels manager Mr. Olin, who warns Mike about the room and its history.  How 56 people who have stayed in 1408 have died, some of natural causes, several suicides, and many other questionable deaths.  "Nobody has lasted more than an hour in 1408," says Mr. Olin.  Mike is on a mission and no matter what he is told he will stay in 1408 and that is final. 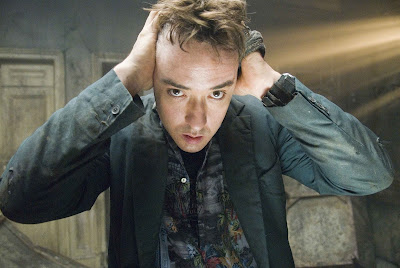 Upon arrival, Mike is thoroughly unimpressed.  The bland furnishings and clichéd art on the walls are thoroughly mocked as he talks into his trusty tape recorder.  He settles in with a free bottle of expensive booze and starts to pass the time when things start to get a little eerie.  Mike is not easily rattled but he starts to become unglued pretty quickly as things start to happen.  The radio turns on and ominously plays "We've only just begun" by The Carpenters.  Mike take a psychological ass kicking that propels the remainder of the movie.  Director Mikael Hafstrom has included a few homages to other great psychological horror films as he has the walls crack open like in Polanski's "Repulsion" and a snow-covered scene that brings back images of Kubrick's "The Shining".  This movie doesn't approach that level of greatness but is still a good film none the less.  John Cusack acts alone in a room for most of the film and pulls off an amazing performance.  The movie boils down to a man who is having trouble dealing with the death of his daughter, even though in flashbacks Katie assures him "daddy, everyone dies".  "1408" is well made, well, acted and worth checking out so watch it tonight.