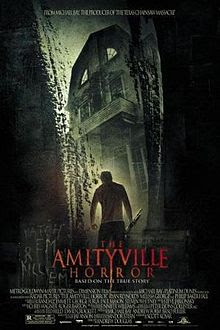 "Houses don't kill people, people kill people".  The original 1979 movie starred James Brolin and Margot Kidder as a family that moves into a big beautiful house only to find it has a storied and brutal past.  The movie is based on a true story of the most famous haunted house in .  The house itself is a very iconic image in the history of horror movies, almost like the mansion in "Psycho"  The movies both old and new are based on the book "The Amityville Horror" by Jay Anson.

Ryan Reynolds and Melissa George take on the lead roles of George and Kathy Lutz, while their little girl Chelsea is played by up and coming superstar Chloe Grace Moretz ("Kick-Ass", "Let Me In").  Taking place in 1974, George is a building contractor who is looking for a new house for his new instant family.  Kathy is a widower with 3 kids so George must really find Kathy special.  All kidding aside they find a giant house at a bargain price and wonder what the catch is.  Well here it is, they are told a year earlier a family was brutally murdered after living there for 28 days.  Things start out great for the family as they usually do, but things don't stay that way for long.  George becomes more angry, more aggressive and begins to lose touch with reality.  Is it the house or is he just in a little over his head with what's going on in his life?  This movie also loads on the typical horror clichés.  It has a cold and creepy basement, freaky kids up to no good, old priests who have lost their faith and get attacked by flies, you know the usual. 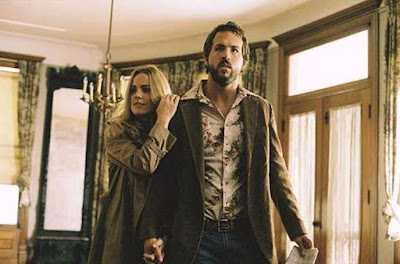 has a new imaginary friend in Jodie, who might not be all that imaginary (or alive for that matter)  Kathy also starts to see and hear things.  After witnessing the changes overcoming George she consults the local priest played by the great Phillip Baker Hall.  We get a little more backstory on the house, but the priest role is pretty underused.  While in the house George feels physically ill and his mental state starts to quickly erode, until he finally loses it.  I know this isn't the greatest movie, but for a horror remake it does the job and doesn't crap all over the original.    Ryan Reynolds is known more for his comedic roles, but he is also a good dramatic actor (see "Buried").

There are countless sequels and other "Amityville" horror movies but the original and this remake are the ones to watch.