The Summer of Swinton "Young Adam" 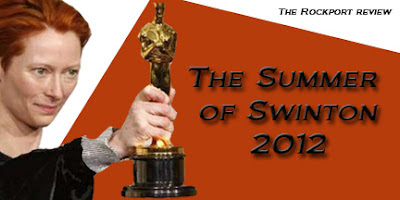 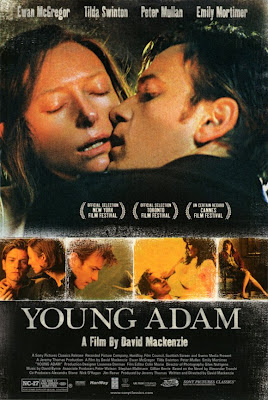 Love and regret.  Cold weather and hot drama.  The 2003 Scottish film "Young Adam"  stars some of the finest actors working today Ewan McGregor, Tilda Swinton, Emily Mortimer, and Peter Mullan.  Based on a novel by Alexander Trocchi, "Young Adam" is a study in character, mood, and psychology of its well-defined characters.

Taking place in the 1950's .  Joe (McGregor) is working on a coal barge when he sees a woman's body floating towards him.  He and the much older Les (Mullan) drag her aboard. She looks to have been assaulted as she is only wearing a thin petticoat.   Joe seems particularly upset at the site of this as if he knows something.  Joe's backstory is told in a number of flashbacks.  He was a writer who fell in love with a girl named Cathie (Mortimer), their rocky relationship is chronicled in most of the flashbacks.  They eventually show how Joe ended up working on the barge.  Daily life on the barge is cold, cramped, and dirty.  Throw in Les's wife Ella (Swinton) and you have the makings of a sort of one-sided love triangle.  Although she half-heartedly tries to deny Joe's advances, she ultimately gives into him.  Her marriage to Les is just as cold and bitter as a winter.  Les knows their having an affair, but really does nothing to stop them.

As we find out Joe is really not that good of a person, but he is not really all that bad either.  We also find out what has been haunting him, and there are things he could do to set the record straight, but does he risk his own life to do it?  All of the characters are tortured souls in one way or another, making their way through life like a slow rolling fog.  All of the acting is magnificent, especially by the women.  Nothing is held back and their fearlessness makes a huge impact.

"Young Adam" is rated the dreaded NC-17 for explicit sex and nudity, but it's not done in a gratuitous or exploitive way.  Don't let the rating discourage you from seeing this truly great film.  Search it out tonight!

The Summer of Swinton "The Deep End" 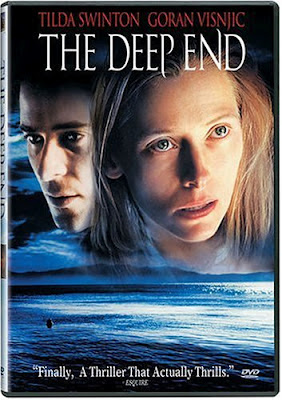 "The Deep End" premiered at the 2001 Sundance Film Festival and was a breakthrough role for actress Tilda Swinton.  She plays Margaret a fiercely protective mother of three who starts to lose her grip when her gay teen son is caught up in the murder of a nightclub owner.

The story takes place in Tahoe where Margaret is basically a single mother since her husband works on an aircraft carrier in the .  Beau is her oldest at 17 and has been seeing the much older nightclub owner Darby.  She confronts Darby about their relationship at his club called the Deep End and tells him to stay away from Beau and offers him money.

Beau looks to be a good kid who always seems to be getting into trouble and making the wrong decisions.  He is a boy with an absent father and looks up to sleazy Darby.  One night he comes over to visit and they start to argue over his mother's visit and her offer.  A fight breaks out and things get out of hand.  Early the next morning Margaret finds Darby's dead body washed up on shore with a boat anchor lodged in his chest.  She furiously runs around hiding the body and the evidence fearing her son killed him. 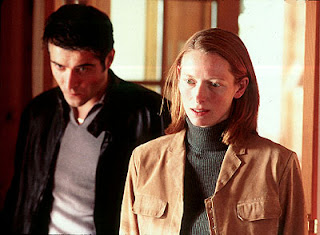 The next day a man appears at her door, it's not the police but it's just as bad.  Alek Spera (played by Goran Visnjic, who was on the show ER at the time) and his business partner are con men looking to blackmail her with a videotape of Darby and Beau having sex.  He wants $50,000 in 24 hours or he sends the tape to the police.  Although she tries she can't come up with the cash.  The next day when Alek comes to collect Margaret's live in father-in-law had just had a heart attack that moment.  He helps give CPR and eventually saves his life.  This starts off a very strange and interesting relationship between Alek and Margaret.  Alek is the stereotypical con man with a heart of gold.  He feels for Margaret's situation and tries to persuade his partner to call of the blackmailing.  This doesn't fly.

This movie is all about Swinton's performance as a mother who will stop at nothing to protect her son, but also showing how lonely and vulnerable she is with her husband gone for long stretches of time.  Her strength and determination to protect her family and the lengths she is willing to go are remarkable even though she is not sure of her son's innocence.  All while taking care of everyone else and not letting on that something is seriously up.  This is a great character study and Tilda is amazing! So check it Out!