"Jeff Who Lives at Home" A Duplass Brothers Movie 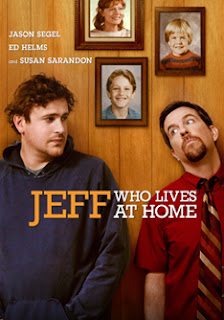 From Indie writer/director brothers Mark and Jay Duplass comes to the movie that was my favorite film of the 2011 Austin Film Festival and is now available on DVD and On Demand.  This quirky comedy stars Jason Segal and Ed Helms as two very different brothers who are brought together by fate and strange circumstances.

Jason Segal is Jeff, a stoner who lives in his mom's basement.  He strongly believes in fate and that everything in the world is somehow connected and has a purpose.  While sitting on the couch gettin' high he gets a wrong number phone call from a guy asking for "Kevin".  Jeff lets him know that nobody named "Kevin" lives there.  He is then berated by a bunch of angry expletives and hangs up.  This begins Jeff's journey through the film.  He sort of reminds me of another famous slacker named Jeff, "The Dude, or El Duderino if you're not into the whole brevity thing"  I'm talking about one of my all-time favorite movies "The Big Lebowski"  Although this Jeff does have his own style, their outlook on life is quite similar.  His mother Sharon is played by Susan Sarandon, an office worker looking for something more in her life as she is starting to feel her age.  She ends up finding excitement in the form of a secret admirer. 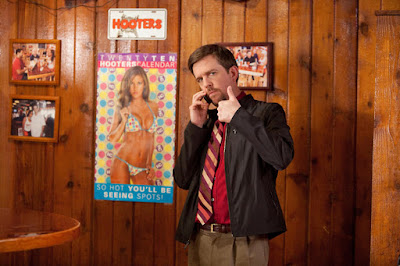 Ed Helms plays Jeff's older somewhat more successful brother Pat.  He is married to Linda (Judy Greer) and has just bought a Porsche without consulting her.  Needless to say after dropping this bomb their relationship in walking a fine line.  Since they live in an apartment and don't have any kids, Linda suggests that it would be easy to go their separate ways.  Over the course of the film, with Jeff's help, he rediscovers his love for her and what he really wants out of life.  Finding your place and connecting with family is a big theme in this seemingly dopy comedy.

Taking place over one day Jeff has one job to do.  Take the bus to Home Depot and buy a bottle of glue to fix a kitchen cabinet.  On the bus, he is distracted by a guy wearing a basketball jersey with the name "Kevin" on the back.  He thinks this is a sign and follows the guy only to get mugged in the end.  This does, however, lead him to Pat who is spying on his wife.  She is having lunch with another man and Pat thinks she could be having an affair.  The movie revolves around the brother's relationship and their misadventures.  The Duplass brothers have a unique way of making movies that are very real and heartfelt.  Although not much seems to happen in the course of the story, you can't help but feel like you been on a journey of discovery with these characters.