"The Innkeepers" Deserves a Visit 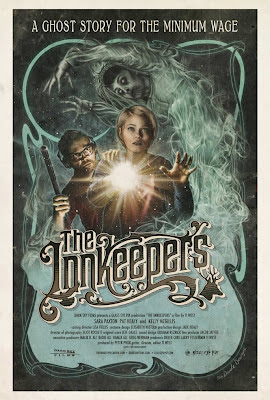 This is Writer/ Director Ti West's follow up to the 2010 sleeper hit "House of the Devil". His filmmaking style is very apparent in "The Innkeepers".  He is known for his slow burn style of horror that, like a lot of Hitchcock classics, relies on strong characters and story rather than intense blood and gore.

Sara Paxton and Pat Healy play Claire and Luke the two employees working the last weekend of the closing Yankee Pedlar Inn.  They are both pretty geeky but real and highly relatable.  They are good friends and just trying to get through the weekend as there are only a few guests.  You really get to know and Claire and Luke and feel that they could be your friends.  So when things start to happen you actually fear for their safety, rather than cheering for their death.

Luke is an amateur paranormal investigator and the Pedlar has long thought to be haunted by the ghost of Madeline O'Malley who was murdered there in the early 1900s.  Claire is cute and dorky and at times acts like a ten-year-old which is not annoying but makes her a more sympathetic character.  She also uses an inhaler for her asthma which comes into play a few times.  One of the final guests to arrive is a former television star and current psychic healer Leanne Rease-Jones (played by Kelly McGillis).  Claire is a big fan of hers and connects with her in a number of ways.  The last guest is an old man coming to stay one more night in the honeymoon suite that he and his deceased wife stayed in many years ago.  He is a very creepy and mysterious old man who has bigger plans in store for himself. 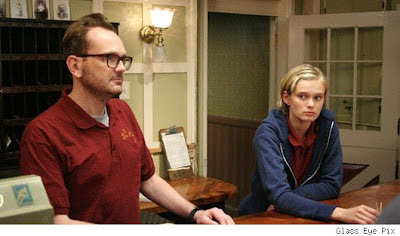 The movie is dialogue driven and moves at a pretty slow pace which could irritate some people expecting an action-packed bloodbath.  The movies relies a lot on a suspenseful atmosphere to reach an emotionally rich climax.  There are still a bunch of scares and disturbing images most of which are quite effective and well earned.  The films musical score also really help to build the suspense as well as the camerawork.  But it really comes down to the characters and the acting which is pretty damn good even for a horror movie.  I would suggest buying the DVD or Blu-Ray as it has 2 commentary tracks and other special features.