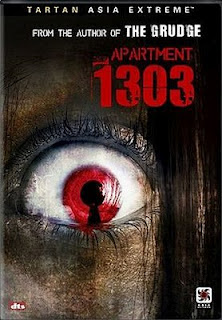 Starting about ten years ago an explosion of Asian horror movies made their way to the and many have been remade.  "The Ring" and "The Grudge" being the most popular of the dozen or so remakes.  The Japanese movie "" was released in 2007 and is now being remade with Mischa Barton starring.  The remake has yet to be released and like most movies, these days is in 3D.

The original "" is quite similar in theme to "The Grudge" in that it revolves around the spirits of a mother and daughter that years back were involved in a murder-suicide.  The apartment is now cursed and infects all of the future female tenants.  Asian horror films almost always involve some sort of ghost story or restless spirit that wreaks havoc on the living from beyond the grave

Sayaka is a young woman who gets a deal on her first apartment.  So she throws a party to celebrate.  She then unexpectedly jumps off the balcony to her death in front of everybody.  Her sister Mariko is convinced that it wasn't a suicide and starts her own investigation.  The girls' mother is so grief-stricken that her favorite daughter has died she spirals into madness.  Like a lot of J-Horror films, "" relies a lot of atmosphere, suspense, and creepiness.  Mariko finds out that her sister is the fifth young woman to have jumped of the balcony and starts to see the ghosts of the mother and daughter who haunt the place.

The backstory and origins of the curse are revealed and all of the horrible things that have happened there.  The story is heavily structured and planned out, but is quite an enjoyable watch for the casual horror fan.  This movie is apart of the Tartan Asian Extreme DVD series.  Add it to your Netflix queue today.