"A Dangerous Method" Works to Perfection!

This is the third and final review chronicling the working relationship of director David Cronenberg and actor Viggo Mortensen.  "A Dangerous Method" portrays the relationship between the two fathers of psychoanalysis Sigmund Freud and Carl Jung.

In a year (2011) when the Academy recognized and honored some real crap and decided to ignore and brush off films like "A Dangerous Method" is easy to see how the Oscars become more and more irrelevant as the years go on.  "A Dangerous Method" delivers an all-star cast featuring brilliant performances by Keira Knightley, Michael Fassbender, and the aforementioned Mortensen.  This film also has one of the best musical scores of the year. How it was shut out from any Academy nominations is hard to believe.  Shame on you Academy voters! (stepping down off my soapbox)

The film opens in 1904 with a young woman named Sabina Speilrein (Knightley) being brought in kicking and screaming to a mental institution and into the care of Dr. Carl Jung (Fassbender).  Jung has decided that this is the patient he will use a new course of treatment called "the talking cure" invented by his colleague Dr. Sigmund Freud in .  The theory being that all people need to heal their mind is to talk out their problems.  Knightley deserved a best actress nom for her performance as Sabina.  The physical and emotional weight she brings to the character is something to admire.  Dr. Jung finds out that Sabina was abused by her father and this led to all kinds of sexual repression.  She's developed a fetish so that she becomes excited by being spanked or humiliated.  This repression and embarrassment have driven her to the brink of madness. 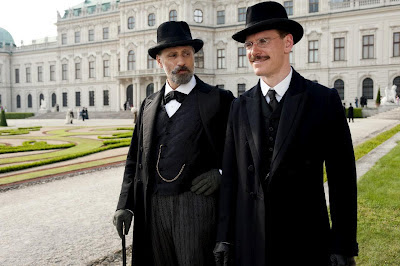 We finally get to meet Dr. Freud when Jung goes to meet him in .  As usual, Mortensen doesn't disappoint as the cigar-chomping doctor who's opinion is that everything is some way or another is related to sex.  He was nominated for a Golden Globe for his work.  Freud and Jung have two different views on interpreting peoples minds.  Freud thinks Jung is too much of a mystic, relying on dream interpretation and premonitions.  Jung disputes Freud's claim that everything boils down to sex, that it's too simplistic and that Freud himself is quite repressed.

If there is one thing that could be said about this film is that like it's doctors it's very cold and clinical.  Sabina's Russian accent and mannerism are sometimes pretty robotic, but this is who she is.  Sabina is very self-conscious and doesn't seem to be that comfortable in her own skin.  As treatment progresses Jung can only hold off a physical relationship with her for so long and eventually crosses the doctor and patient line.  Their affair while at times intense is still pretty clinical and subdued.  Jung is also married and has two girls, but his wife is quite insecure and fears he will leave her if she doesn't give him a son.  Questions of whether monogamy is natural are also raised.

Over the years Jung and Freud write letters back and forth and Sabina always seems to come between them.  Sabina is a very smart and articulate woman and dreams of being a psychoanalyst herself.  Her relationship with the two famous doctors give her the confidence and experience to finally realized her dream.  This movie was adapted from the book "A Most Dangerous Game" and the play "The Talking Cure".  It is now available in several video formats and should be NOT be missed!

"Eastern Promises" Are Meant to be Shared 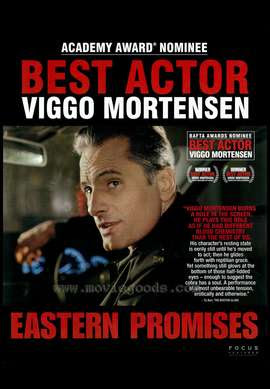 This is the second collaboration by director David Cronenberg and actor Viggo Mortensen.  "Eastern Promises" has a lot of the same aspects of their previous film "A History of Violence".  It involves the Russian mob this time but is still chock full of brutal violence and a very dark and heavy overall atmosphere.

The film takes place in London and follows Anna (Naomi Watts) who is a midwife at a local hospital.  Her story begins when an unknown young pregnant girl is rushed into the emergency room.  She gives birth to a baby girl, but the mother dies.  Intrigued by this woman Anna finds a journal in the girl's purse and takes it home with her.  Anna lives with her mother and uncle, both of whom have strong ties to Russia.  She gives the journal to her Uncle for translation.  They learn that the girl was named Tatiana and lived a very troubled and violent life as a prostitute.  Anna also finds an address for a local Russian restaurant/social club called the Trans-Siberian.  It's owned by a seemingly nice old man named Semyon.  They have a friendly talk about family and the journal she found.  Semyon requests to see the journal and has such a way that he is equally comforting and threatening at the same time.  He is a very controlling and powerful man in the guise of a sweet old grandfather figure or should I say godfather figure.

Viggo Mortensen plays Nikolai a driver for the "club" but also handles body processing and disposal.  He is intense and cold but also calm and professional.  When Anna returns to the restaurant with a photocopied version of the journal Semyon is disappointed and requests the actual journal.  Anna tries to leave but her motorcycle won't start, Nikolai approaches her and offers her a ride, she hesitates but accepts.  Anna has a great line that sums up the major theme of this movie "Sometimes birth and death go together".  The connections of Anna as a life-giving midwife and Nikolai a brutal mobster are quite apparent.  Anna knows who these people are and how dangerous they can be, but she continues to search out Tatiana's family to save baby Christine and to give her a better life. 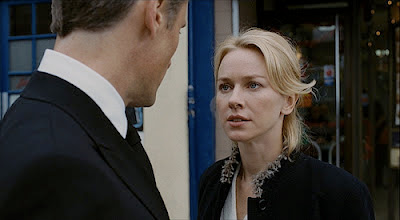 Kirill is Seymon's only son and of course, he is a violent drunken idiot who threatens everything his father has worked for.  Nikolai sees this and, although he is not a blood relative, he looks to overtake his spot in the family.  Some betrayal and infighting ensue which includes the bathhouse scene.  Nikolai is set up and must fight off a few hit men while completely nude.  Cronenberg's camera doesn't shy away from showing the raw brutality and realism of the encounter.  This being said Viggo has always been known for thoroughly researching his roles and inhabiting his characters and this role is no different as his performance earned him an Oscar nomination.

We are told that in the Russian mob a person life is told by their tattoos and Nikolai has several.  None more important than the stars he gets over his heart and on his knees in a ceremony attended by several bosses as he becomes a made man.  Certain things come to light that spins things around and we begin to look at Nikolai in a whole new way.  Anna and Nikolai have an interesting relationship and must work together to achieve a common goal.  Without giving away too many spoilers, this is a great movie to search out.

"A History of Violence" with Viggo Mortensen 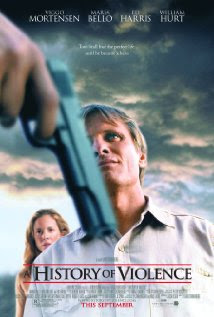 Famed Canadian director David Cronenberg's last three movies have one thing in common they all feature "Lord of the Rings" star Viggo Mortensen.  These movies are "A History of Violence (2005)", "Eastern Promises (2007)", and "A Dangerous Method (2011)".  Their collaborations have made Cronenberg's films more widely accessible to mainstream audiences, while also bringing strong critical praise.  Each of these films will be reviewed in the coming weeks in the Rockport Review.  I have also previously reviewed a number of Cronenberg's earlier films such as "Rabid", "Scanners", "Dead Ringers", and "The Fly".

"A History of Violence" is based on the graphic novel by John Wagner and Vince Locke.  Screenwriter Josh Olson was nominated for an Academy Award for his job in adapting it for the screen.  This is the story of a small town man named Tom Stall (Mortensen) who owns the local diner.  One night he skillfully dispatches a couple of thugs who try to rob the place.  He then becomes an overnight media sensation while also inadvertently bringing his dark and buried past to the surface.  Tom lives the classic American small town life, he is married to Edie, played by Maria Bello.  Together they have a teenage son and a younger daughter.  Tom and Edie have a strong loving relationship, but when a group of tough guys from Philly comes to town, they not only threaten Tom's marriage but his life.

Ed Harris plays Carl Fogarty a made man from the Philly mob who visits Tom's Diner.  He has a nasty scar where his left eye used to be and is quite intense and menacing.  He calls Tom by his supposed former name "Joey, Joey Cusack".  With Edie at his side, Tom is confounded and insists he has the wrong guy.  Fogarty talks to him like they are an old friend and his words have a truthful intensity to them.  Local Sheriff and friend Sam looks into Fogarty's background and confirms everything Tom suspected.  These are dangerous and violent people.  When Fogarty stalks Tom's wife and daughter at the local mall and tells of her husbands shady past, Edie starts to freak out. 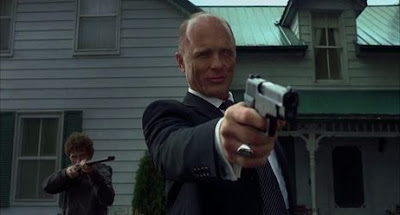 Uneasy times consume the Stall family; who is their husband and father anyway?  Are Fogarty's accusations true?  Things come to a head and an intense confrontation in the Stalls front yard ensues.  Tom has no choice but to protect his family at all costs, but his son Jack seems to be following in his father's violent footsteps.  Tom realizes he needs to put "Joey Cusack" to sleep for good so he goes to visit his high ranking mob brother Ritchie at his Suburban Philadelphia mansion.  Ritchie Cusack is played by William Hurt who was surprisingly nominated for a Best Supporting Actor Oscar for his 10 minutes of screen time.  Tom/Joey and Ritchie have little brotherly love for one another as they confront each other one last time.

This movie is skillfully acted and well put together.  Viggo Mortensen is known for really inhabiting the characters he portrays and doesn't disappoint here.  David Cronenberg got his start in horror films and has been known for his kind of bizarre bodily violence, something that is readily apparent in a number of scenes in "History".  Check out the DVD/Blu-Ray if possible it has a bunch of special features.