Schedule a Date with "The Woman" 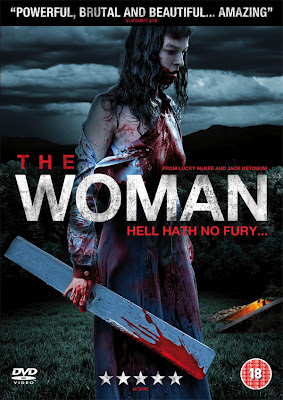 "The Woman" is a sequel to the 2009 movie "Offspring" both of which are based on novels by Jack Ketchum.  Both films are extremely brutal and push the limits of horror.  "The Woman" is played by the talented and extremely dedicated Pollyanna McIntosh who was the leader of a pack of feral human cannibals that roamed the forests of the in "Offspring".  She was the only one of her people to survive and a new chapter or her life is about to be written with "The Woman".

We meet the Cleek family who lives on a big country farm in a small east coast town.  Chris is a lawyer with a small practice, his wife Bella is played by genre favorite Angela Bettis.  Chris rules his family with a strong sense of discipline, while Bella is very meek and unable to fully confront her domineering husband.  While out hunting Chris observes a curious sight.  A dirty feral woman bathing in a river, he is transfixed and hatches a plan.

Peggy and Brian are their teenage kids who also have another five-year-old sister who is just referred to as "Darlin'". Peggy is very quiet and withdrawn from her other classmates as something seems to be deeply troubling her.  Brian seems to idolized his douche bag of a father and does what ever is told of him probably as a sort of coping mechanism.  There is always this uneasy sense and anxiety that exist within their house.  Something is going on here but what?  Director Lucky McKee and his crew make great use of sound to really drive home the emotion and intensity of each scene. 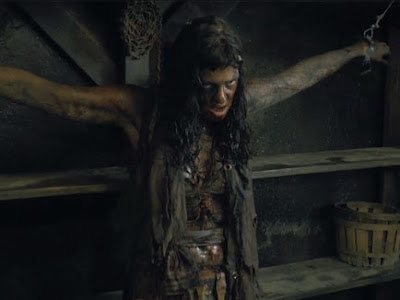 Chris takes it upon himself to clean and civilize this Woman no matter the cost.  He captures her and strings her up in the family cellar.  She is a primal vicious beast of a woman, but she is being held captive, so yeah I'd be a little pissed off too.  When Chris's hand gets a little to close she bites off a finger and swallows it only to spit out his wedding band.  Chris brings in the whole family into his obsessive and demeaning little project.  He tortures and humiliates the Woman all under the guise of domesticating her.  It feels like Chris has gotten tired of holding his own family prisoners over the years and now wants a new challenge.  Everybody except Brian are utterly repulsed and against his actions, but feel powerless to do anything about it.  It is quite disturbing to see Brian's transformation into a younger and possibly more destructive version of his dad.   When a certain event's finally hit their boiling points and secrets are revealed Peggy literally releases the beast and the Woman has her bloody vengeance.

The story line bares a resemblance to a previous Jack Ketchum novel turned movie called "The Girl Next Door"  which I have also reviewed.  "The Woman" has been called by some as misogynistic and pure trash as all the women are subjected to extreme psychological and physical torture by the men.  A lot of what has been said seems to reflect the views of the original 1978 film "I Spit on Your Grave" which was really more of a feminist approach.  She takes control of herself and the situation without the help of a man.  Overall "The Woman" will only appeal to a hardcore group of horror fans who seek it out.  Its available on DVD as part of the Bloody Disgusting Selects Series.