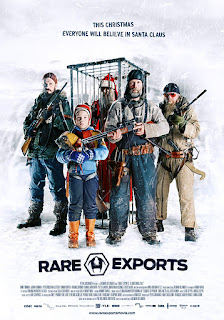 Last Fall a strange little movie from Finland came out that plays like a fairy tale from hell. During an archeological dig, an American company finds the "real" Santa Claus. Far from the jolly 'ole Saint Nick we all know, this Santa is thought to be a giant child-eating beast. Frozen in an iceberg Santa's elves rush to unthaw him, along with rounding up all of the area children to appease their master.

The story is told through a boy and his father as they struggle to get by on a steady diet of milk and gingerbread cookies. Pietari is an odd but endearing little boy who has read some disturbing stories about Santa and realizes what lies in the mountain. As the area children and home appliances start to disappear Pietari gears up to try and save the day. His father Raunao is a stern strong-willed man who loves his son, but who also must keep their small family afloat. When the communities reindeer heard is murdered a skinny old bearded man is captured. Raunao and the neighborhood men interrogate the dirty naked old man but get nothing. Is this man Santa?

The ending makes a statement about the commercialization of Christmas and thoroughly explains the title of "Rare Exports". This is not a horror movie but a very creepy fairy tale that is sort of sweet and dreamlike. Its very well made and well acted. The story is quite strange but at its heart really seems to focus on the relationships of fathers and sons. It would be hard to find a target audience for the film, but if you like quirky foreign films you probably won't be disappointed with this one. It is available through some on demand services as well as DVD and Blu-ray 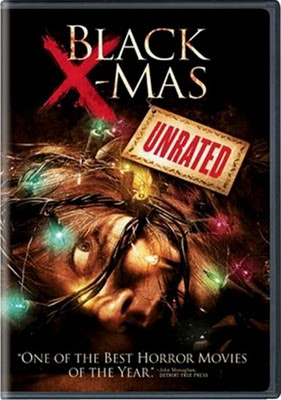 The recent trend of remaking classic horror movies is hopefully on the decline, but not without leaving several horrible films in its wake.  Very few ever come close the original but with "Black Christmas" in 2007 the filmmakers did a good enough job not to embarrass themselves, and actually make a decent movie.

Taking place within a sorority house the day before Christmas break a group of girls and their house mother are terrorized by a former inhabitant named Billy Lenz.  Billy has quite the backstory and its told in flashbacks throughout the movie.  Its extremely disturbing and involves murder, incest, and all those beloved family pastimes.  Born with yellow skin and rejected by his psychotic mother, Billy lives most of his life locked in the attic.  As a teenager, Billy is raped by his mother and she has a baby girl.  When he finally gets out he kills his mother and makes Christmas cookies out of her skin (Yummy!!).  His sister disappears and Billy is caught and sent to a mental hospital.  Years later he escapes (naturally) and heads back home to the now sorority house. 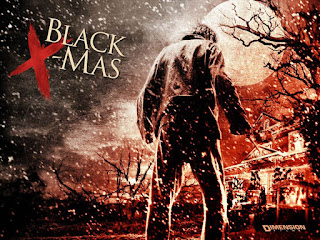 The girls start receiving prank calls and one by one they start to disappear.  The story had been modernized from the original 1974 version. Cell phones play a big part, as well as computers.  Although the characters and killings do bear some resemblance to the original.  Like a lot of horror remakes, this is more of a re-imagining of the story rather than a shot for shot remake.  A lot of horror clichés are used but are used effectively. The girls are pretty one dimensional and serve as victims quite well.  There is a big shock ending that makes you sort of rethink a lot of what you just saw.  Paying close attention to the flashbacks should help.  Unlike a lot of the recent remakes which water down the violence and gore to get a PG-13 rating  "Black Christmas" takes pleasure in making it R rated with gruesome kills and gory pieces all over.  The DVD includes a "making of" and Director's notebook features and is definitely worth a buy.  You can find used copies for very cheap all over the internet.  The original 1974 film is also available on DVD and Blu-ray and is essential viewing for all horror fans. 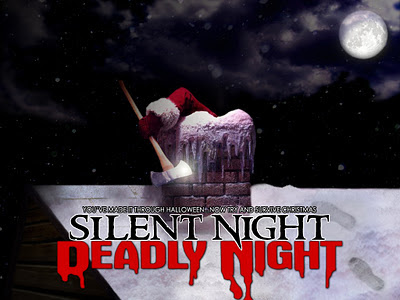 I can't think of a better way to welcome December and the Christmas Season than with a sleigh full of Psycho Santa horror movies.  First on the list and most notorious of all is the 1984 slasher film "Silent Night, Deadly Night".  This movie enraged parents and critics alike.  Parents picketed theatres who showed it and even now it's hard to find since the DVD has been out of print.  With the success of the "Halloween" movies, every holiday was open season for a horror movie.  Should Christmas and Santa Clause be off limits? Of course not, as I'm sure most of the protesters never saw the movie to begin with.  Even now can this movie really be that bad for you?

This is the story of a boy named Billy.  On Christmas Eve he and his family visit their comatose grandpa in a mental hospital. Then on the way home, they stop along the road for a guy dressed in a Santa suit who is having car trouble. This is the same Santa who earlier robbed a convenience store and shot the clerk.  Billy's parents are then brutally murdered, but Billy and his baby brother escape and are eventually placed in an orphanage.  Over the years Billy not only has to deal with the repressed psychological trauma of what happened that night but the strict and stern punishments of the Mother Superior at the orphanage.  We flash forward ten years.  Sister Margaret helps Billy get a job at a local toy store and as soon as he seems to become normal and happy again, Christmas time comes around.  When the store's Santa can't come in, Billy is forced put on the suit.  Meeting his greatest fear head on really does not go well, not at all.  During a drunken Christmas party at the store, Billy finally snaps and goes on a brutal and bloody killing spree dressed as ole' Saint Nick. 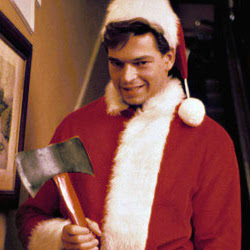 Compared to many other horror films the story is actually quite good, and what happens is really quite believable.  It could also be why this movie is so effective. The kills are pretty sweet from a horror perspective and the effects are decent.  Since this is an 80s slasher movie there is the requisite bunch of gratuitous sex and nudity.  All of which Billy punishes for being naughty.  What is most disturbing about this movie is when Billy dressed as Santa comes in contact with little kids.  After killing a babysitter and her boyfriend, he gives a little girl a box cutter he used to kill a previous victim.  It is also believed that Billy will return to the orphanage to get revenge on Mother Superior.  When a Santa appears at the orphanage a police officer open fires and kills him right in front of all the children.  This turns out to be the wrong guy (oops!).  The officer just killed a priest (double oops!!).  The ending is a little anti-climactic and it does setup it up for a bunch of inferior sequels.  If you can find it, it's definitely worth a viewing.  PUNISH!