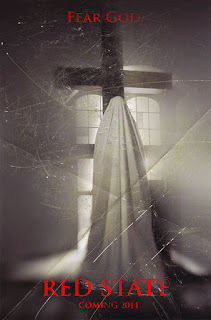 Every since "Clerks" premiered at the 1994 Sundance Film Festival writer/director Kevin Smith has enjoyed a cult following like no other.  His ear for dialogue and endearing true to life characters make his films the voice of the twenty somethings.  His characters spout off "Star Wars" references and make childish dick and fart jokes, all while coming off as people you would like to hang out with.  Although recently he has had a string of pretty bad movies, "" returns to the controversial territory that followed his 1999 film "Dogma".

Three high school boys go looking for sex on the internet and find an older woman willing to do the deed with them.  When they get to her trailer park home, they are drugged and brought into a radical Christian fundamentalist compound.  There we meet Reverend Abin Copper, played by the remarkable Michael Parks.  Abin's wife Sara (played by Melissa Leo) is the women who got the teens and now they must pay for their sins.  The cult-like group calls themselves the Five Pointers and the authorities are anxious to take them down.  It sounds a lot like David Koresh and Branch Dravidians from and their big standoff in the '90s.  Copper spouts off a fiery sermon with a guy shrink wrapped to a cross.  He equates gays to devils who should be executed on site.  The man strapped to the cross is shot in the head and one of the three teens is up next, but when one of them breaks free and finds the armory full of assault rifles all hell is about to break loose (but not in a literal sense). 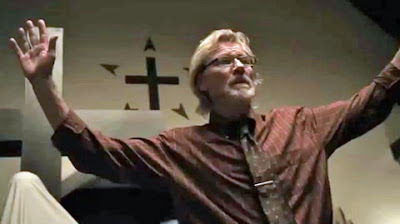 When Abin murders a sheriff deputy who gets to close,  the ATF and local police encircle the compound and a violent confrontation ensues.  Smith deals with such modern issues as gay rights, religious extremists and domestic terrorism.  How well he deals with these issues is a little suspect.  Smith's forte over the years has been comedy and "" feature mainly action and drama, but with a dose of dark humor.  The gunfights are tense and visceral and something you don't usually see in his films.  John Goodman plays Joseph Keenan and heads the ATF attack on the compound.  He has orders to treat the compound members as terrorists under the Patriot Act and to kill every last one of them. One of the imprisoned teens gets together with Abin's granddaughter in order to escape with the compounds little children.  We then hear a voice from above and things come to a head.

This is not the greatest film in the world even by Kevin Smith standards, but it has more than "Jersey Girl" or "Cop Out" had to offer.  The films he made earlier in his career really stand on there own and as he has even said took place in a different time in his life.  Kevin also has another special available on Netflix streaming called "Too Fat for 40" which is entertaining but extremely T.M.I.