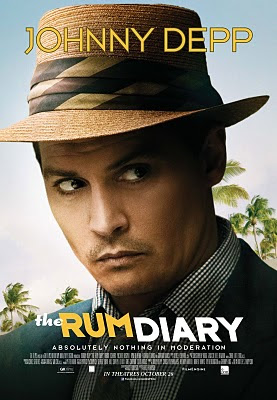 is one of the coolest and hippest cities in the country.  The capital of and the "Live Music Capital of the World"  They hold other such notable festivals such as South by Southwest (SXSW) in March and Fantastic Fest in the Summer.  This was my third trip to AFF (Austin Film Festival) and it is known as the "Writer's Festival" putting much of its focus on the art and craft of screenwriting.  Along with a full slate of movies, they also hold a weekend writers conference with panels from some of the biggest names in the business.


A few days before the festivities it was announced that Johnny Depp would be in attendance for the regional premiere of his new film "The Rum Diary".  With "Johnny Fever" taking hold of the city, I had my film badge and got in line for at the time was a relatively short line that quickly snaked through the streets of Downtown Austin.  After about a two hour wait I was able to secure a front row seat on the left corner.  After a bit, more waiting film critic Elvis Mitchell introduced Director Bruce Robinson and finally, Johnny Depp made a brief appearance.


After the film, Elvis, Bruce, and Johnny came on stage for a Q & A.  Bruce seemed to have hit the backstage "refreshments" a little hard and was a bit out of it.  Johnny on the other hand was tack sharp with wit and humor.  Working the crowd like I'm sure he's has done a thousand times.  He described his relationship with "Rum Diary" author Hunter S. Thompson and the struggle to bring this film into fruition.  After a few audience questions, it was time to say goodbye.  A number of festival-goers rushed the stage for an autograph and his security team quickly turned them away, but Johnny stepped forth and knelt at the end of the stage and began signing.  I was able to get through and he signed my festival badge.  Quite the experience all around. 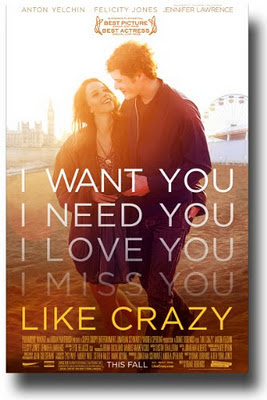 As for the rest of the festival, I saw retrospective showings of Whit Stillman's "Metropolitan", and the animated classic "Toy Story" with Pixar frontman John Lasseter in attendance.  The documentary "Cinema is Everywhere" takes a look at how movies are made and viewed all over the world.  On Saturday night I saw "Jeff, Who Lives at Home" the new film from the indie favorite Duplass brothers and was the best film I saw at the festival.  Starring Ed Helms, Jason Segal & Susan Sarandon.  The last night I was there I was able to see the Sundance Film Festivals Grand Jury Prize-winning film "Like Crazy" Starring Anton Yelchin and Felicity Jones.  About a British college student (Jones) who falls for an American student, only to be separated when she's banned from the after overstaying her visa.


This is a truly a great festival and would highly recommended it to writers, filmmakers, or just plain movie lovers, but to be honest this is really the only festival I've been to so I am just a little bias. 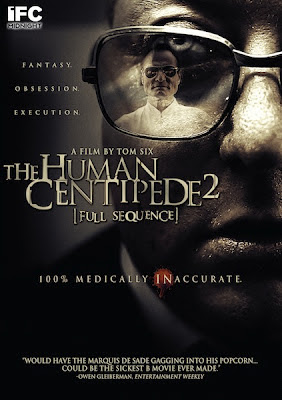 When the original "Human Centipede: First Sequence" came out in 2009 it instantly becomes a cult classic.  You can see my review here.  Disgusting, wrong and sadistic are only a few of the nicer words critics have called it.  Director Tom Six is quite the showman of shock, having the audacity to create two of the sickest "mainstream" films in recent history.

Of course, with any sequel, it needs to be bigger, bolder, and shockier (yeah, I made that word up).  Since the great Dr. Heiter was killed at the end of the first film, we get a new protagonist in the form of Martin, a short and very rotund man who has lived a very disturbing life.  He is mentally handicapped and was severely abused by his father, his therapist has dreams of raping him and his mother even tries to kill him.  Martin seems to get by with an obsession with the original Human Centipede film.  He plans to create a centipede of his own but with twelve people instead of the original three.  Martin works as an overnight parking garage attendant and knocks out a bunch of people and keeps them in a warehouse.  While Dr. Heiter was a skilled surgeon, Martin is quite crude in his methods. 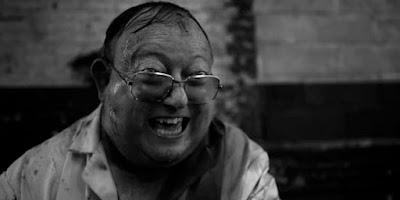 Every aspect of this film has been designed to shock and disgust to the highest degree and some scenes are just so outrageous you might find yourself chuckling.  Martin is spectacularly realized by actor Laurence R. Harvey, his name could be an alias since anything about him is hard to find, and there was another somewhat famous actor named Laurence Harvey in the 1950s and 60s.  I don't remember Martin ever saying a word, but his character and mannerisms are just so perfect for this role.  He is creepy, disgusting, dirty and utterly insane.  In a very interesting twist, Martin is able to get one of the actresses from the first film to show up at his warehouse with the promise of auditioning for a Quentin Tarantino film.

Director Tom Six also had the grapes to present everything in black and white.  He knows how to push peoples buttons and everything is planned out to give a certain effect.  This movie is quite hard to watch even when you know what you're in for, and for people to pay money to see it, I'm sure it brings a huge smile to Six's face. 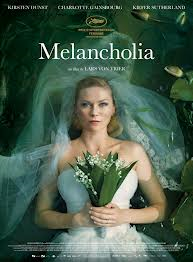 Writer/Director Lars Von Trier is one of the most polarizing and discussed filmmakers working today, and a lot of it has nothing to do with his movies.  Is he a genius or a pompous douche bag?  An endlessly talented artist or egomaniacal freak?  The Danish director has had several internationally acclaimed films from "Breaking the Waves" and "Dancer in the Dark" to "Dogville" and "Manderlay".  His most controversial film has been 2009's "Antichrist" (which I have also reviewed).  His Cannes Film Festival press conferences have been the stuff of idiotic legend, as he can't seem to stop making bizarre and offensive remarks.  I'll let you Google the rest of the story if you're interested, let's get down to business with "Melancholia"

"Melancholia" is his latest opus and while not as controversial as "Antichrist" it keeps some of the same dark and disturbing themes.  Kirsten Dunst won Best Actress at Cannes this year for her role as Justine, a severely depressed woman who is getting married.  Justine's sister Claire is played by "Antichrist" star Charlotte Gainsbourg.  The cast also features Kiefer Sutherland, John Hurt, Charlotte Rampling & Stellan Skarsgard.  The film is presented in two parts named after the sisters with Part 1 being "Justine" and Part 2 being "Claire".  All of the drama is held under the threat of global destruction as a rogue blue planet named Melancholia is on a collision course with Earth. 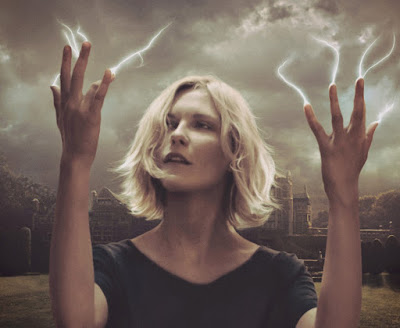 Everything takes place within a gigantic estate that seems cut off from the rest of civilization.  The tone and feel of the film is pretty heavy and dark.  Justine's extreme depression has been a burden on everyone for years, with Claire being the only person to really take care of her.  With the wedding being a last ditch effort to bring joy and happiness to her life.  The first part of the film takes place during the reception.

The only thing Justine takes solace in is that the world will soon be ending.  With the planet Melancholia visible in the sky, getting bigger as it approaches, Justine seems to form a sort of cosmic bond with it.  Could this be her savior?  Claire, on the other hand, is married to John (Sutherland) and has a little boy.  She is racked with terror and anxiety at Earths impending doom.   John is a sort of amateur astronomer and keeps telling her that the threat will pass, knowing full well that we are pretty much screwed.

"Melancholia" like a lot of Von Trier's films is filled with symbolism and layers of meaning.  Two sisters colliding, two planets colliding.  Justine's severe depression also closely follows Von Trier's own such proclaimed depression.  Justine at one moment tells Claire "The Earth is evil" "Life on Earth is evil" "Nobody will miss it".  This movie is dark, depressing and oddly beautiful and intriguing.   To see this movie it is showing on several on demand services and will be coming soon to theatres. 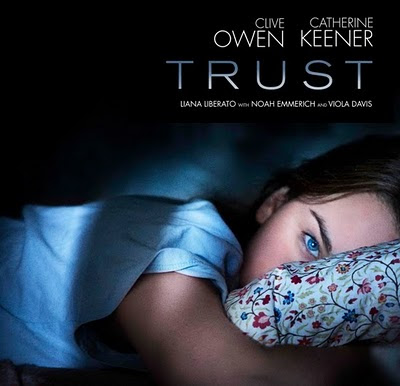 There have been several movies made about internet predators preying on young girls, most of them having there own unique angle. I reviewed the Ellen Page film "Hard Candy" a few years ago, in which she turns the tables on the guy. "Trust" takes another different angle in looking at how an attack affects the dynamics of a family.

Directed by David Schwimmer and starring Clive Own and Catherine Keener as the parents of Annie played remarkably by Liana Liberato. Liana, in her first major film role, is not the usual twenty-something playing a fourteen-year-old, but an actual teenager playing the emotionally complex role of a girl dealing with the aftermath of being raped.

Set in an upper middle-class suburb of Chicago. Annie starts a chat room relationship with a guy named "Charlie" a supposedly 16-year-old guy from California, who quickly becomes 20, then 25. Annie is angered by his lies but still continues to chat with him. When Annie's parents drive her brother to college, she meets up with Charlie at the local mall. She is shocked and embarrassed to find out Charlie is at least 35, but for some reason, Annie doesn't run away screaming. They get ice cream together and she eventually agrees to get to a hotel room with him, where she is raped. This all happens within the first 30 minutes of the 106 minute film. Annie tells her best friend what happens who then tells school officials. The news spreads like wildfire and soon enough everybody knows. She is taken to a hospital and examined as well as interviewed by police. 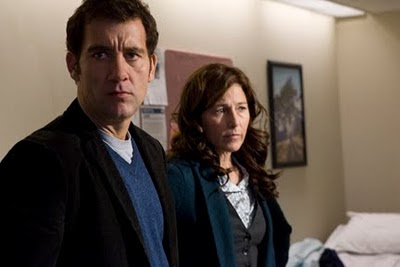 Recognizing that we live in such a youth obsessed culture the filmmakers try to find someone or something to blame for what happens to Annie but find no easy answers. The major theme of the film is that you can only do some much to protect the people you love and really bad things do happen, people will fall down, but its how you get up and the support of other people that can you through it. Clive Owen plays her father Michael and in a bit of obvious irony is an ad exec who's company exploits teen sexuality to sell clothing. Most of the second half of the film deals with Michael's misplaced anger and frustration at a man who seemingly doesn't exist. Charlie is an old pro having done this to at least three other young girls. The FBI works very hard and diligently with what evidence they are given, but with so many similar cases backlogged its hard to make any progress.


The mother played by Catherine Keener is seriously underused, and it's a shame since she is such a great actress. Liana Liberato did win the best actress award from the Chicago International film festival and is the real star of the movie. The film overall feels like a well produced movie of the week or a Lifetime style movie. There are scenes of extreme melodrama and predictability but the film as a whole plays pretty well.