Take it Sleazy with "The Babysitters" 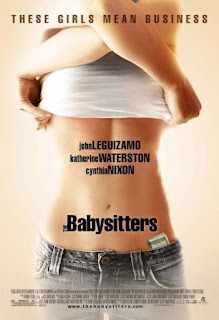 “The Babysitters” could be classified as a Lifetime style movie mixed with a big handful of Cinemax sleaze, but is it ever fun to watch. It’s quite the guilty pleasure, but also a disturbing view of seedy suburban life.

First time writer/director David Ross creates a world where seemingly every man is a depraved, sex obsessed creep. One such man (the most “normal”) is Michael played by John Leguizamo who is going through the proverbial mid-life crisis. Married with two young boys he begins an illicit affair with the babysitter, Shirley played by Katherine Waterston. She is a tall brunette who is smart, beautiful and has good business sense. When Michael tells his friends about Shirley’s “services” they want her to babysit for them too. So she gets a few of her hot friends to help out and all of a sudden she is running a prostitution ring and getting a 20 percent cut.

She tells us in the beginning that she is a regular girl from a non-dysfunctional family and has never been abused or anything. She just likes the money and giving head isn’t any more humiliating than flipping burgers. There is no morality in this film and the main characters realize this as Shirley mentions to Michael that they’re both going to hell for this. The most outright uncomfortable and disturbing scenes take place at a cabin where all the middle-aged married guys get together with all the underage babysitter prostitutes for a big party. Everybody has taken ecstasy and bad things are close behind. During a bathroom scene, we are shocked back to reality as to what these people are doing. This is really the only point where we see any consequences from this whole ordeal.

So if you happen to find yourself bored one night, grab a few beers, a bag of chips, lock the door and watch “The Babysitters”. 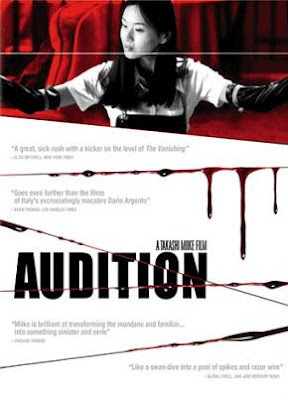 Japanese auteur Takashi Miike burst into the American consciousness with this 1999 horror film. Miike cranks out the films like no one else by directing a staggering 86 titles over the last 20 years. Films like “Audition”, “Ichi the Killer”, “Full Metal Yakuza”, and most recently the samurai epic “13 Assassins”

“Audition” stars Ryo Ishibashi as a lonely single father who decides to start dating years after the passing of his wife. The way he goes about finding this new love of his life is either brilliant or cold and heartless. One of his friends works for a movie studio and sets up an audition to interview young actresses for a non-existent movie. I have to say that I’m no expert on Japanese culture, but the depiction of men and women and their roles in society makes quite a glaring message by Miike. During the audition, Ishibashi’s character of Aoyama looks like he is shopping for a new car rather than a woman. The last girl interviewed is Asami, a meek an introverted former ballet dancer. She is beautiful, mysterious, and Aoyama quickly becomes obsessed with her. His friend gets some serious negative vibes off her and warns him to go slow and that something is just not right with her, but he ignores him. 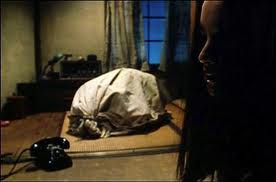 Aoyama calls her and they start a respectful relationship. We also get some more background on Asami as we see her in her apartment and there is indeed something not right with her. The film is well paced and intriguing throughout with a climax for the ages. The last half of this film is not for the weak of heart and/or stomach but really does deliver the goods. Asami’s past is revealed as well as what she does to Aoyama. Asami is her own women who has suffered through some serious tragedy and abuse in her past but is still extremely disturbed.

There are several DVD editions out there and I would have to recommend the unrated and uncut version to get the full effect that Miike intended. Check it Out! 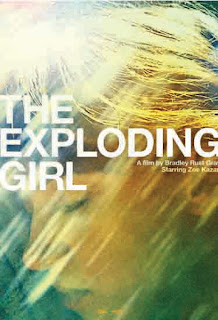 This little independent drama is written and directed by Bradley Rust Gray definitely has a niche audience. Made on a shoestring budget and filmed “guerilla style” on location in New York City. It seems to be a throwback to the 1970s when these kinds of movies were made more frequently by people like by John Cassavetes, Bob Rafelson, and others

Zoe Kazan plays Ivy, a basic girl next door type who is home for spring break. Al (Mark Rendall), a childhood friend, asks to stay with her and her mom as he has nowhere else to go. Their relationship is like any other boy-girl “friends” situation. It can be awkward and strange at times, and there are moments when you think there could be something more going on. This is pretty much the entire story in a nutshell. Zoe is above all “real and honest” in her portrayal of Ivy, who also suffers from epilepsy. She has a boyfriend back at school (Greg), but when he is involved in a car accident with an old girlfriend as a passenger, their relationship is the next victim. This is one of “those” movies that are heavy on feeling and atmosphere. Its structure is plotless and meandering, but you really can’t seem to pull your eyes away from the screen as these characters really start to grow on you. There is no music or score to the film and many of the scenes are filmed at a distance, letting the characters interact with there real environments. The authentic feel of this film really puts it at a different level than most films. Nothing feels forced or made up to serve a greater good, things happen and the characters react. The people at Oscilloscope have put out a DVD package that is available, but I would first recommend seeing it on Netflix watch instantly.

Like I said at the beginning this movie is really aimed at a very specific audience but if you’re ready to disconnect from a summer full of CGI Robots, Aliens, and big budget garbage, give the Exploding Girl a try and thank me in the morning.