"The Myth of the American Sleepover" 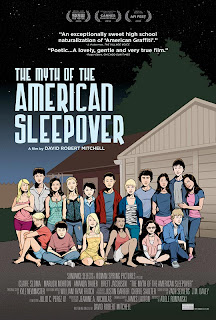 The coming of age story is a staple genre in film that seems to come and go with the times. The mid to late 1990s had “American Pie” and other such imitators, along with a revival of the teen horror movie. “Myth of the America Sleepover” is an independent drama that won a Special Jury Award at the 2010 South by Southwest Film Festival for Best Ensemble Cast. The cast is populated with mostly real teens and non-actors, giving it a very real and authentic look.

Set in the early 1990s in a middle-class Midwestern town, this film looks like it could be an autobiographical account of director David Robert Mitchell’s formative years. The story meanders through the lives of several teens on the last days of summer vacation. Everybody is searching for something in one way or another. Looking for adventure, a girl seen in the grocery store and for new friends. Mitchell’s film is not exploitive of its characters and rarely resorts to cheap stereotypes. Although minorities are pretty much absent, we are given the usual token black person. This being said the authenticity of the film is quite impressive and similar to what I experienced myself.

This movie, unlike most, treats its characters like real people living real lives. The thoughts, anxieties, and pressures are all there. This is a time before the internet and cell phones when everything was more personal and “real”. But no matter what generation you grew up in there are still basic fundamentals of growing up that are universal. “Myth of the American Sleepover” is available on demand from Comcast and as always check it out!