Before "The Kids were all Right" There Was "High Art" 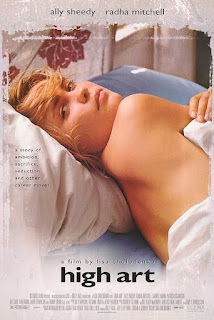 Before “The Kids are Alright” writer/ director Lisa Cholodenko made a name for herself with the highly acclaimed and award-winning 1998 film “High Art” starring Radha Mitchell and Ally Sheedy.

Radha’s character of Syd is an assistant photo editor at a New York City photography magazine called Frame. She lives in a small apartment with her plain and boring boyfriend James. Something is missing in her life and she soon finds it by accident. When the bathroom ceiling starts leaking she visits the neighbors upstairs and finds Lucy (Sheedy) and company. Lucy’s apartment is filled with framed photos that catch Syd’s eye. Unknown to her at the time but Lucy was a famous photographer who left the scene about 10 years ago. Syd wants to help bring Lucy back and Frame is willing to give her the cover of their next issue if she does.

Lucy has been involved in a long relationship with Greta, played by indie favorite Patricia Clarkson, a washed up drug addicted German actress who moved to the States to be with Lucy. Greta is like a lead balloon and is bringing Lucy down with her. Lucy also has self-confessed “drug problem and a love issue, or is it the other way around?” It's only when she meets Syd does her artistic fire and passion return. Greta is crazy jealous of Syd as she starts consuming more and more of Lucy’s time. Lucy has also requested that Syd be her editor for the magazine piece, giving her a big promotion. 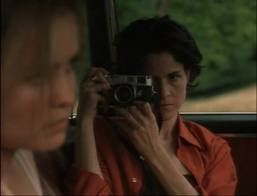 This film relies heavily on art world stereotypes and clichés and is the only thing that holds it down. Frame Magazines chief editor is a guy with a ponytail and dark rimmed glasses, with his assistant being a cold dark haired French woman. Of course, both of them are egocentric douches. The glamorization of drug use is also played up but it in one scene Lucy mocks this after Greta shoots up. This film is really about the love triangle that forms between Syd, Lucy, and Greta and how they use each other to get what they want. Love, trust, loyalty and devotion are the main themes of “High Art”

The film has a typical downer ending but is also hopeful. Like most movies “High Art” isn’t perfect but the brilliant performances really make it one to see. This was a break out role for Radha Mitchell as she has since starred in “Finding Neverland”, “Silent Hill”, “Pitch Black” and Woody Allen’s “Melinda and Melinda”. Ally Sheedy also won numerous Best Actress awards for her role. This movie is currently available through Netflix watch instantly, so check it out!