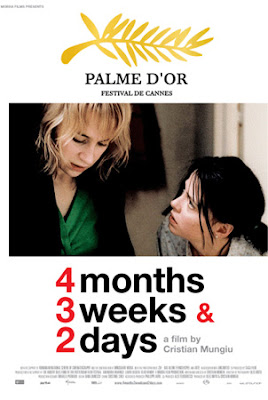 A winner of numerous international awards, including the Palme d’Or at the 2007 Cannes Film Festival, this film is quite the jarring an emotional experience. Set in 1987 Romania the title 4 Months, 3 Weeks and 2 Days refers to how far along the character of Gabriela is before she gets an illegal abortion. Aided by her best friend and college roommate Otillia, they risk their lives to end the one growing inside her.

What is uniquely different about this film is that the story is told from the friend’s point of view and not the woman who is getting the illicit procedure. Gabriela, or Gabita as she is referred to, is a meek and quite girl from a decent family who decides to get a back alley abortion from a man who goes by the name of Mr. Bebe. He has done this many times and requires that a number of rules must be met in order to avoid arrest.

One by one of all the rules and requirements and broken by the women. They couldn’t get a room at the right hotel, Gabita lies about how far along she is and they don’t have all the money that is required. Mr. Bebe is a dark and mysterious fellow. While quiet, cold and very regimented it feels at any moment he could burst into a fit of violence. After all of his rules are broken he scolds the girls and gets up to leave when Otillia offers herself to him. Now that is a friend! 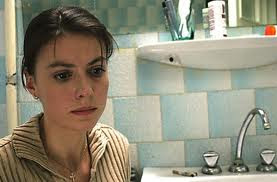 The procedure is done and the camera does not shy away, although not exploitive or gratuitous, you are like a fly on the wall experiencing this life altering event. During the early hours of her recovery, Otillia has to go to her boyfriend’s mother’s birthday celebration. This is quite the juxtaposition of scenes of two birthdays. During a big dinner scene, the camera focuses on a despondent and withdrawn Otillia as she ponders what could be going on back at the hotel. She finally ditches the party when Gabita doesn’t answer the phone and races back to the hotel. Gabita is in a sort of catatonic state lying on the bed. Otillia finds the fetus on the bathroom floor and wraps it up in a towel and puts it in her bag. Mr. Bebe did give them instruction on how to dispose of it in his usual cold and heartless manner. Otillia follows through.

Friendship and loyalty are the cornerstones of this story while the abortion and politics of the Iron Curtain era in Romania are used to dramatize it. Obviously, this movie isn’t for everyone, but it is a beautifully portrayed character study of a story about issues that are universal. I’d also recommend watching the 2004 film Vera Drake by Mike Leigh.