"30 Days of Night" This is What a Vampire Movie Should Be!

In recent years there have been tons of comic books and graphic novels adapted into movies with varying success.  For the most part, they are a goldmine that will continue to tap way past their usefulness.  30 Days of Night is a graphic novel by Steve Niles and Ben Templesmith that gives an interesting new spin to the overly used vampire genre.  Taking place in Barrow , one of the most northern cities in the world, every winter the sun doesn’t rise above the horizon for 30 days.  A perfect place for a clan of bloodthirsty vampires to set up camp.

30 Days of Night was released in the fall of 2007 and directed by David Slade, who also directed one of the Twilight movies and the brilliant Hard Candy that I previously reviewed on this blog.  30 Days stars ’s own Josh Hartnett as Eben the town’s young sheriff who works to keep the peace in the very cold and depressing atmosphere.  Melissa George is cast as Stella the best looking fire marshal in film history.  When you think fire marshal you think of a big old burly guy with a beard, a grizzled veteran with decades of real-world experience and not a blonde haired supermodel.  Anyway, I guess she is a whole lot better to look at, and she also doubles as Eben’s estranged wife.  As Barrow starts shutting down for the 30 days a bunch of strange things start happening.  A team of sled dogs is murdered and the internet and phones stop working.  Coincidence, I think not.  The leader of the Vampires is played by Danny Houston who really gives life to his undead character of Marlow.  The Vampires talk in a foreign language that was created specifically for this film.  Although a number of questions do remain like where did they come from? Where do they go for the other 11 months of the year?  These questions might be answered in the graphic novels, but I have yet to read any of them. 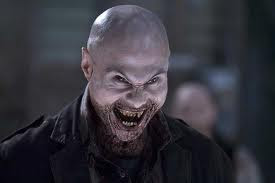 After a bloody feeding frenzy wipes out most of the towns remaining people, Eben and Stella help protect a small group of survivors.  This truly is an R rated horror film and not one of those kid friendly PG-13 flicks.  The blood and gore are top notch and flows freely to satisfy your most hardcore fan.  I have two wonderful words for you “Neck Chop” and there are a few of them.  The acting is actually pretty good and the pacing is perfect.  The ending is kind of a head scratcher, but with the poor quality of horror movies being released these days, I’m willing to let it go.  Last year a direct to DVD sequel was released called 30 Days of Night: Dark Days featuring all new characters and a recast version of Stella.  It’s a cheap and pointless piece of trash.  Enough said.  Although the original movie is definitely worth a buy!