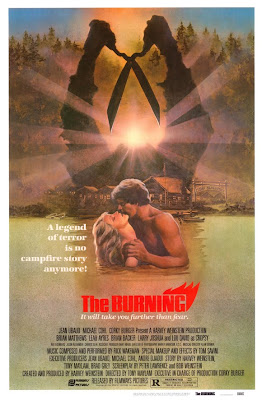 "The Burning" is a vintage ’80s slasher movie known more for its cast and production team than for its mediocre material. This is the first film by mega producers Bob and Harvey Weinstein of Miramax Films. It also marked the screen debuts of Jason Alexander, Holly Hunter, and Fisher Stevens. The gore and effects were also done by the all-time great Tom Savini.

Like Friday the 13th and many other films like it, The Burning takes place at a summer camp in upstate New York. The story follows the campfire story of Cropsy who years back was horribly burned in a prank gone wrong. He now roams the woods getting his revenge on future generations of campers. Cropsy’s weapon of choice is a pair of hedge clippers. As a character, Cropsy is pretty weak and could use a lot more development but without any sequels, this is all were going to get. The kills really aren’t anything special with the exception of the raft massacre. It has everything you could expect from a typical 80s teen slasher. A girl takes a shower, a couple skinny dips late at night; two kids have sex in the woods and are immediately killed.