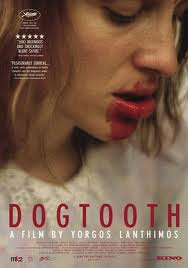 This Greek film directed by Yorgos Lanthimos won a special award at the 2009 Cannes Film festival and is quite possibly one of the most bizarrely original films I have seen in years. It’s about trying to raising your kids without the influences of the outside world. It’s the age-old question of nature versus nurture. At the end of the day, you just have to trust and hope that your kids will make the right decisions. But how these parents raise these kids is a bit strange, to say the least.

This family of five has three teenage children (two girls, one boy) that live in a fenced off compound on the edge of town. We never learn any of family members’ names as they are just referred to as Eldest daughter, Younger daughter and Son. The Father is obviously a fiercely controlling man and quite possibly stark raving mad, who owns a local factory. The Mother is the kid's teacher and your basic homemaker, although is firmly under the control of the Father. The teens have never been outside the high fences of their house and have no idea how the rest of the world lives. There is a television but all they can watch is home movies. What’s even stranger is the vocabulary they are taught, with basic words having completely different meanings. The sea is a leather chair, a motorway is a strong breeze, and a zombie is a little yellow flower.

In this world the Father has created, he is fighting against nature itself and has contingency plans and explanations for anything that might pop up. He uses Listerine as a punishment. The airplanes that fly overhead are really just toys. The cat is the most fearsome, man-eating animal around. They hold family contests for stickers. The kids are also told they have another brother who has been banished from the family and is forced to live on the outside because he was being bad. There is no end in describing how strange this family is. 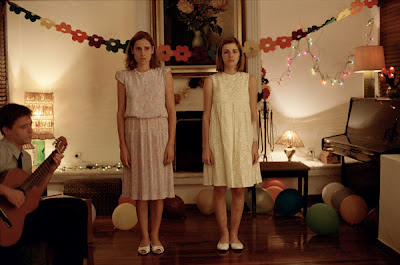 The only outsider that is allowed in is a female security guard from the Fathers factory named Christina (the only named character). She is paid to have sex with the son to quell his urges, but when Christina requests that he go down on her, he refuses. Afterward while talking to the Eldest daughter, who is fascinated by the sparkling headband that Christina wears, comes up with a new plan. Christina gives her things from the outside in exchange for “licking her”. The Teens are such a model of perfect innocence that to them licking a person anywhere on their body can be exchanged for favors. The Eldest daughter bargains for some actual movies that she finds in Christina bag, but when the Younger daughter squeals on her. The Father is infuriated that his Children have been contaminated by this vile woman. He goes and beats Christina with a VCR, then beats the Eldest Daughter with a VHS tape duct taped to his hand. With that the Father is no longer willing to trust anyone from the outside, so he has the Eldest Daughter replacing Christina to have sex with the Son.


At dinner, the kids are told that they are not able to leave home until they have lost a Dogtooth. After the eldest daughter’s experiences, she wants out so bad that she knocks out a bunch of her own teeth including a Dogtooth. She then goes and hides in the trunk of the car and waits to leave. The end. This is really one of those movies that need to be seen to be believed. It is definitely is not for everyone. If it was rated it would be NC-17 for its handful of graphic sex scenes. But don’t let that deter you, see it!