"The Human Centipede" The B-Movie Circus Side Show 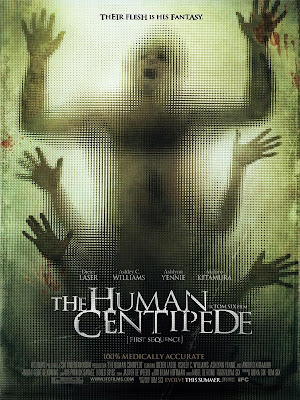 Like it or not Writer/Director Tom Six is getting recognition and a sort of pseudo-fame for his gross-out horror flick “The Human Centipede”. This movie plays like a B movie sideshow act. Six looks only to use simplistic storytelling techniques and minimal character development to bring his creation to life. This movie was made only to shock and disgust and rarely does either effectively.

The storyline is quite generic and could be lifted from numerous other horror films. Two American college girls traveling in Europe are on their way to a party when their car breaks down in the countryside. Both girls are extremely annoying and shallow New Yorkers who brave the rain to find a house occupied by a mad German doctor/scientist, played by Dieter Laser (I love that name). Perhaps the best part of the movie is Laser’s performance as the insane doctor who will stop at nothing to create this monster. 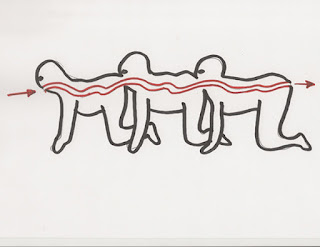 Along with a Japanese guy, it is explained that the surgery will connect the three young people ass to mouth to create a “medically accurate” new animal. And why does he want to this? Probably either for shits and giggles or to launch a new German fetish porn site. The movie promises a Human Centipede and you eventually get a Human Centipede. While there are some sick and twisted images, it really does little to create a sense of empathy for the characters that are in the unfortunate positions. Then comes the question of once you’ve created a Human Centipede, what do you do with it? He takes it out in the backyard for a bit, then at night he locks it up in a cage

Tom Six is currently in post-production for next year’s sequel which promises a longer centipede and hopefully a better plot. He set the bar pretty low for the first one, so hopefully, the sequel will cash in on the problems of the first one.