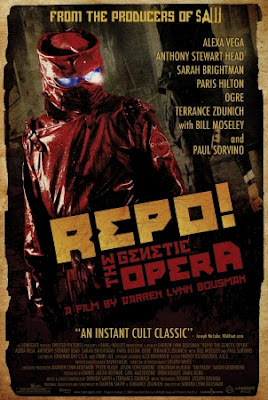 “Repo!” is a very unique film that almost never gets made. It is an attempt to recreate a movie experience in the same vein of the 70’s cult phenomenon “The Rocky Horror Picture Show”. Director Darren Lynn Bousman who created the Saw franchise really has puts his heart and soul into making Repo, but it is made for a very select audience.

“Repo!” takes place in a distant future where organ failure is a worldwide epidemic. The Geneco Corporation will provide you with the new parts and financing, but miss a payment and the Repo Man will come to collect. Earlier this year a very similar movie with Jude Law and Forest Whitaker called “Repo Men” was made with mixed results. Thank got it wasn’t a musical as well; although it would be worth the price of admission to see Jude and Forest sing a duet.

More than anything “Repo!” seems to be a big exercise in style over substance, but saying that I have to admit I did buy the DVD. The storyline is pretty average and melodramatic. Being that it is a musical; the songs are pretty good but not great. All the metal and modern rock songs do fit the movie well and compliment the films bleak and gory landscape. Now looking at the acting, I never thought I would say this until hell froze over, but with a cast that includes Paris Hilton, the acting was pretty good. Paris plays the surgery addicted daughter of Geneco’s president Rotti Largo, played by Paul Sorvino. Opera singer Sarah Brightman plays, wait for it, opera singer Blind Mag, in her first acting role. Horror genre favorite Bill Mosley is cast as one of Rotti’s son’s. Mosley is a character actor who is just about perfect in every role he plays from all the Rob Zombie films to the little independent movies. 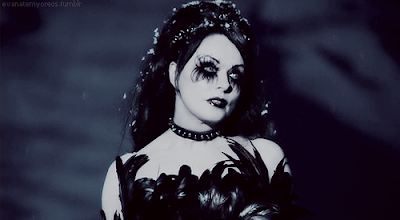 “Repo!” is an interesting little experiment of a film and a good addition to your Netflix Queue. Also to set the record straight “Repo!” is really no “Rocky Horror”.