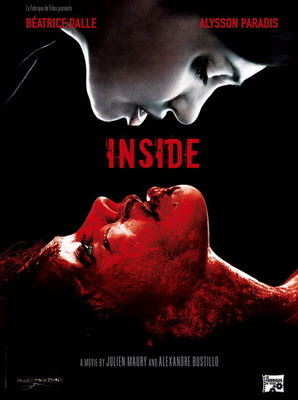 The second film in my reviews of the new French horror wave is called “Inside.” It was released on DVD in the U.S. in early 2008 and is only for the true hardcore horror fans. Many movies have used pregnancy as a basis for a horror movie, but “Inside” takes it in a different direction. This was the first feature film for directors Alexandre Bustillo and Julien Maury.

The story opens inside the womb of Sarah, a news photographer when a huge jolt sends her four month old fetus crashing into the wall of her stomach. We then see that there has been a car accident and her husband has died. It’s four months later and her baby has survived; she is ready to get a c-section the next day when there is a knock at her door. It’s a woman who wants to use the phone, Sarah is skeptical and denies her. The woman knows her and starts talking to her by name. After being harassed Sarah calls the police, they check things out and say they will check back again later. The tension, suspense, and mood are kept high throughout the films 83 minutes. 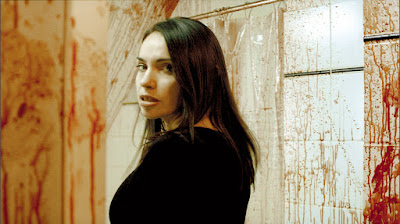 What is unique about this movie is that even though Sarah is pregnant, the story and the horror is not about her fetus. It’s not evil or the spawn of Satan, it just a regular baby that just wants to be born. As Sarah is sleeping, the mystery woman has made her way inside (there’s that word again) the house. She grabs a scissors in an attempt to cut the baby out of her. She doesn’t get too far for when she pierces Sarah’s belly button, she awakes and is able to escape to the bathroom and lock the door. Just who is this woman anyway? Like the movie “Frontier(s)” it takes place near Paris where race and political riots are happening (a lot of angry people over there.)

The rest of the movie is an extremely bloody test of survival. Other people will enter the house but will not be coming back out. The blood and gore effects are top notch and brutally realistic. The acting is also much better than you would expect from a film like this. All capped off with an ending so nasty you’ll literally puke in your popcorn. So why would you want to see a movie like this? Because you are a sick, sick, person. It’s also great entertainment! It’s not for 85% of people, but for a select few it will be a rare journey into severe depravity. Buy it today on DVD!