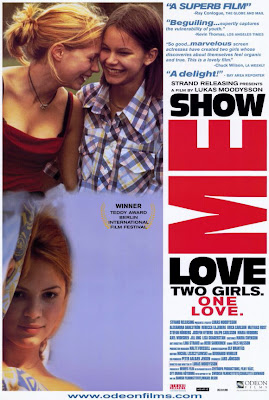 Internationally acclaimed director Lukas Moodysson’s 1998 film “Show Me Love” is a brilliantly scripted teen drama/comedy that has been compared to “American Pie” in its real-life depiction of teenagers. This was Moodysson’s first feature film and one of Sweden highest grossing films ever.

The story really touches on a wide variety of human truths that apply to teenagers as well as parents all around the world. The basic culture of a high school is the same no matter where you live. In the small town of Amal, like many American towns, teens have little to do and are bored to no end. Agnes is just turning sixteen and her family moves quite frequently, leaving her with few friends. She is a social outcast and rumored to be a lesbian. Her parents are loving and supportive but not in a fake, condescending way. They are not your typical teen movie parents who are usually either absent or played as out of touch buffoons. On the other side of the spectrum there is Elin, the most popular girl in school, but does this mean her life is somehow easier? Not by a long shot. Being beautiful has its downside. Elin and her slightly older sister Jessica have your basic love-hate relationship. They hang out with each other all the time but constantly argue and fight only to make up. 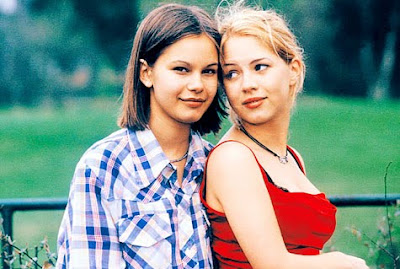 Against her wishes, Agnes’s mom throws her a birthday party, with her only her guest being her pseudo friend Viktoria who is confined to a wheelchair. The party is a disaster as Agnes, unprovoked, blows up at Vicktoria. As Elin and Jessica leave one party they look for another and decide to crash Agnes’s. Elin ends up kissing Agnes on a dare from her sister leaving Agnes used, confused and angry. In the middle of a half-hearted suicide attempt, Elin returns and the girls walk, talk, and goof off. Can a movie about teen lesbians be made without being exploitive or clichéd? Yes, Moodysson’s characters are as real and as honest as it gets, he never goes for the cheap laugh or the tired stereotypes. These are real people and it makes the film so much richer. The other question would be, can Agnes and Elin be open with there feelings for each other at school? Elin is very hesitant and blows off Agnes for a big part of the story, deciding to hook up with Johan instead. Johan is another well put together a character who all too often buckles under peer pressure and never makes up his own mind. This leads us to the paradox of being a teenager, everybody wants to be unique and different while wanting to belong and fit in with everybody else. Then there is the age-old question of what is normal? The movie ends with a very metaphorical scene at the school when Agnes and Elin decide if their relationship is worth going forward.

High school can be and usually is the most volatile time in a person’s life and often lays the foundation of who we are as adults. Will Agnes and Elin’s relationship last? Who knows, but the bigger message of this movie is over coming what other people think of you and becoming your own person.