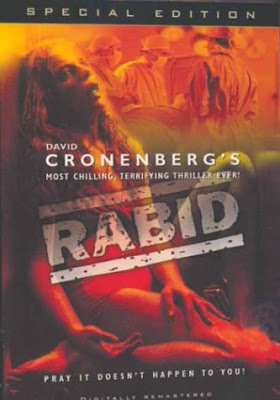 David Cronenberg is one of my favorite directors. His movies are genuinely creepy and terrifying. But they are also dramatic and have a sort of political commentary to them. His films are daring and at times controversial, see 1996’s “Crash.” Not to be confused with the 2004 Oscar-winning movie by Paul Haggis. David’s last few films (A History of Violence & Eastern Promises) have been his most commercially successful without losing any of their trademark style. 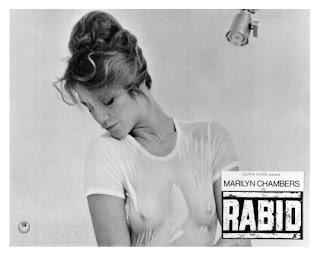 Rose and her boyfriend are involved in a horrible motorcycle accident. With no nearby hospital, she is taken to the Keloid Clinic that specializes in plastic surgery. With Roses injuries, she is subjected to an experimental skin grafting procedure. Her boyfriend was not badly hurt and stands by her side. Rose awakes from her coma with a strange need for blood. It is very bizarre and very Cronenberg like, as to how she got this way and how she feeds. The people she infects eventually turn into crazed zombie-like monsters. Rose uses her looks and her body to lure both guys and gals to their doom. Rose seems to be rebelling against an unfair society. Filmed in the late 1970s, Rose’s character is a manipulative female force to be reckoned with.

After escaping the clinic and wreaking some serious havoc she is taken in by her best friend Mindy, who wants nothing but to make her better. However Rose cannot control the urges inside her and Mindy is turned. This is all happening during Christmas in the beautiful city of Montreal, Canada. The government starts to mobilize forces to contain the infection. There is an extremely disturbing scene within a shopping mall where Santa Clause is gun down by stray bullets when an infected man starts attacking people. The public, the police, and everybody infected or not have been lost to the intense craziness of the situation. The ending is many things it’s disturbing, creepy, ambiguous and fitting for this type of movie. A definitive classic in the annals of horror.